Developers use Oculus Quest to create a location-based VR game inside their office.

When Oculus presented attendees at OC5 with an arena-scale multiplayer demonstration of Dead and Buried 2 powered by the Oculus Quest, we knew the Quest was something special. And although Oculus has since squashed any rumors of arena-scale VR coming to Quest headsets at any point in the near future, this hasn’t stopped other developers from taking on the challenge themselves.

In fact, it appears as though one team in particular has been making significant advancements with shared space multiplayer on the standalone headset. In a video posted to YouTube entitled “Oculus Quest ‘Shared Space’ Demo,” Thurst Vector—the same team behind the one-of-a-kind Virtual VFR project—showcases a sci-fi-themed VR experience operating on the Oculus Quest which features two users, both wearing Quest headsets, occupying the same virtual space in real-time.

Similar to existing location-based VR services, such as The VOID or Dreamscape, the video shows both users move through the experience by physically walking around the environment. Based on the description provided by the company on its website, the team designed the virtual free-roam environment to match their real-world office, allowing them to navigate their way through the experience without having to worry about accidental collisions with real-world objects.

After being guided through a portion of the ship by a high-pitched robot companion, the two players then found themselves ducking for cover as a horde of autonomous drones begins a vicious attack. After taking out all enemy units with their futuristic laser pistols, the team continues forward into an elevator which leads them to the outside of the ship and the open vastness of space.

From there, they make their way across the exterior of the ship while simultaneously shooting down a second wave of hostile drones before returning to the bowels of the ship. At this point, the team must retrieve a pair of security cards and enter a precise set of codes in order to prevent a virus from causing the ships reactor core from self-destructing.

While the objectives themselves are simplistic, Thrust Vector’s prototype free roam experience is an unbelievably exciting example of the unrestricted gameplay capable with the Oculus Quest. Normally, this type of location-based experience would require thousands of dollars in equipment to produce, and even then users would still be forced to wear bulky PC VR backpacks.

What’s really interesting is their ability to track multiple Quest headsets in a shared space. While the inside-out tracking featured on the standalone headset makes it easy to roam freely through a VR environment, tracking the location of a separate headset—that exists within the same space—throughout that large environment is another story altogether.

With this project, Thurst Vector has proven that with the right amount of love and proper calibration, the Oculus Quest VR headset is a definite game-changer for the world of free-roam VR. Although only two players are featured in the video, the team claims their system can support 2-6 players at any given time.

As the company states in the description, their “shared space” demo was created by two programmers and one artist as part of an 8-day developer jam. An official release is scheduled for this summer beginning in the Austin, Texas area. 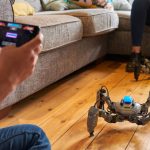 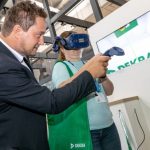