Reach Robotics, the creators of the world’s first AR gaming robot, MekaMonlaunched the next generation of EdTech with a new coding platform – Reach EDU.

If you’re not familiar with Reach Robotics line-up of kid-friendly robots, MekaMon are programmable machines which players can control via a smart device to battle digital opponents—both real and AI—in an augmented space; adding an additional layer of visual excitement to the conventional playtime experience. Now the company is adding even more educational value in the form of STEAM-based learning with Reach EDU.

Learning through play is a key part of the Reach EDU experience. Originally announced at CES 2019, the Reach EDU app has officially launched and now works alongside the existing MekaMon augmented reality gaming app, bringing together creative STEAM learning and advanced robotics in one approachable package.

The Reach EDU app incorporates engaging storytelling to guide learning. Led by Ivy, the Head Engineer at the Mekacademy, students learn to code their MekaMon in a series of game-like challenges in preparation for a mission to Mars.

The app is structured around four core features which can be used independently of the missions to encourage creative play and experimentation:

Additionally, Reach EDU is designed with a range of learners and experience levels in mind.

For those just getting started Draw, MekaMotion and MekaCode help get familiar with coding concepts. Experienced learners can unlock a world of new programming potential with further applications such as Swift Playgrounds.

For students further along in their studies, including those at degree and postgraduate level, third-party educational platforms are being developed to work MekaMon in addition to existing Swift Playground integration.

These will include a Reach Raspberry Pi processing module and a browser version of Reach EDU incorporating Python to support KS3 and 4 curriculums and open the platform up to advanced experimentation.

“There’s a huge amount of creative potential with MekaMon, due to the scope of its expressive movement and personality. Reach EDU is about delivering the tools to take advantage of this, by creating a versatile, accessible, and fun platform for effective STEAM education and ongoing innovation”. – Silas Adekunle, CEO Reach Robotics.

Reach Robotics is  exploring how their AR advances with MekaMon will evolve the Reach EDU experience. Reach EDU will have ongoing updates with new missions, content and supporting materials continually being developed.

The ReachEDU app is available for free on the Appstore and Google Play.MekaMon are available via Apple (in-store and online), Amazon among other retailers.  Schools can order multiple units at a discount via edu@reachrobotics.com.

According to Change the Equation, the number of STEM jobs will grow 13 percent, compared to 9 percent for non-STEM jobs between 2017 and 2027— computing, engineering, and advanced manufacturing are leading the way. 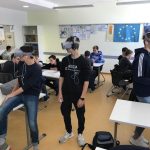