“I am thrilled by what David has accomplished to date and I am excited by the prospects of a new form of communication through PORTL,” said venture capitalist and investor Tim Draper, who is known for his early investments in startups including Tesla, Skype, Coindesk, SpaceX and Twitch.

PORTL founder and CEO, David Nussbaum, calls the company’s product “the first and only, completely self-contained, 4K resolution, single-passenger holoportation machine in the world.” Nussbaum continued: “Having not only Tim’s endorsement, but his partnership, is really the dream.” He added, “I created this machine based on my own experience in tech and entertainment and I knew people would be excited to have access to holographic telepresence in a compact device. Everyday we discover more uses for our PORTL machines, and I have no doubt they’ll soon be everywhere, bringing people together no matter how far apart they are on the map.”

According to PORTL, in the case of live “holoportation” as the company calls it, the person being beamed will have the ability to see, hear, and fully interact with an audience on the other end, all in 4K holographic resolution. Plus, in addition to live holoportation, the company can also film, produce, and edit content and play it back on a loop or through motion activation as a hologram movie.

PORTL Inc. was founded by Nussbaum in 2019 and is already shipping units worldwide. The Epic PORTL Hologram Machine has made early appearances on the red carpet at the Emmy Awards, as well as at ComicCon, the iHeartRadio Music Festival, the Saturn Awards and on ReutersTV.

The company noted that Nussbaum has been an innovator in the holographic projection industry for over six years, and has “beamed” chat show host Jimmy Kimmel from Hollywood to the CMA Awards in Nashville three times, in addition to collaborating on projects with Universal Music Group, Universal Studios, Sony Pictures, Dior and the Ronald Reagan Presidential Library.

Other investors in the round included Pandora investor and former Electronic Arts executive Doug Barry, who also joined PORTL as founding COO and board member. In addition to Barry, others included Joe Lewis, Jim Boykin, and sports and entertainment money management firm True Capital Management.

PORTL states that a table top unit of its hologram beaming device is expected to debut in Q2 2021. For more information on the company, please click here.

Azure and HoloLens combine for a hint at the future

Microsoft has created a hologram that will transform someone into a digital speaker of another language. The software giant unveiled the technology during a keynote at the Microsoft Inspire partner conference this morning in Las Vegas. Microsoft recently scanned Julia White, a company executive for Azure, at a Mixed Reality capture studio to transform her into an exact hologram replica.

The digital version appeared onstage to translate the keynote into Japanese. Microsoft has used its Azure AI technologies and neural text-to-speech to make this possible. It works by taking recordings of White’s voice, in order to create a personalized voice signature, to make it sound like she’s speaking Japanese.

Microsoft has shown off holograms of people before, but the translation aspect is a step beyond what has been possible with HoloLens. This looks like it’s just a demonstration for now, and you’d need access to a Mixed Reality capture studio to even start to take advantage of this. Microsoft’s studios are equipped with lighting rigs and high-resolution cameras to capture a fully accurate digital hologram of someone, which isn’t something that can be done easily at home with a smartphone just yet.

Still, Microsoft’s demonstration is certainly impressive and it speaks to the company’s ambitions with Azure, HoloLens, and beyond. The HoloLens 2 might be targeted at businesses for now, but Microsoft is attempting to build software and services that will scale to wherever augmented reality might end up heading.

The augmented reality training sessions for nurses (Gemini Research, 2017),  the MIT museum, Chinese museum, BBC frozen planet and the immersive experience of the Eurostar train (Eurostar, 2017)  make  people wonder what the future holds in store for educators, which new immersive technologies will be available and how they can be used to augment human experiences. Holography is considered a central theme of augmented reality. But how does it work and what does it really mean? Social media guest blogger Chryssa Themelis takes us behind the scenes, and offers her vision of the future.

A holographic image is composed of light-wave interference patterns. The interference patterns are created by splitting the beam from a laser, sending half to the subject (the object beam) and half directly to the photographic plate (the reference beam). The light reflected off the subject recombines with the light that went directly to the plate, creating a unique pattern of light-wave interference. After the recorded image is processed, the appearance of a 3D subject can be recreated by illuminating the photographic image with another laser beam (Kroon,2012). Hologram often depict an object or subject as a 3D image, using sophisticated laser projectors. Many other methods have been invented to develop holographic images or even video projections.

The Hungarian-British physicist Dennis Gabor was awarded the Nobel Prize in Physics in 1971 for his invention and development of “the holographic method”. The technique as originally invented is still used in electron microscopy. It facilitates biomedical research to investigate the detailed structure of tissues, cells, organelles and macromolecular complexes. Development of the laser popularized holograms starting in the ’60s. and grow rapidly since then. A hologram of a hand reaching out of a store window at the Cartier Fifth Avenue flagship captivates passersby in 1972. Princess Leia is presented holographically in Star Wars in 1977, National Geographic becomes the first mass circulation publication to put a hologram on its cover in 1984 and Designer Alexander McQueen caps his fall fashion show with a hologram of model Kate Moss in 2006 (Bloomberg, 2012). The list becomes endless especially after the invention of HoloLens in 2015.

Holography could play a major role in all levels education. Educational research shows that it could be linked to the theory of embodied cognition (Lakoff & Johnson,1999), facilitating the interaction and understanding because AR could give the human brain a sense of immersion (Invitro, Spada, and De Paolis as cited in De Paolis & Mongelli 2015). Holographic technology could be implemented for:

In the 21rst century, holography as new experiential approach, aims to unlock users form the 2D-limited world.  Alex Kipman, a Microsoft inventor, talks about “the dawn of the age of holograms” in a 2016 TED presentation and claims that we spend many hours per day looking at screens, but interactions and connectivity are limited. He points out: “We are like cave people in computer terms, we have barely discovered charcoal and started drawing the first stick figures in our cave “(TED, 2016).

Kipman, A. (2016, February). Alex Kipman: the dawn of the age of holograms [Video-file].  Retrieved from https://www.ted.com/talks/alex_kipman_the_dawn_of_the_age_of_holograms 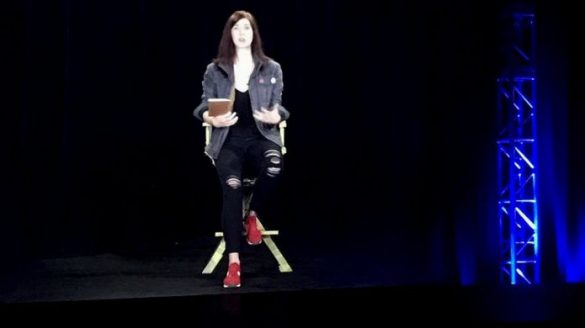 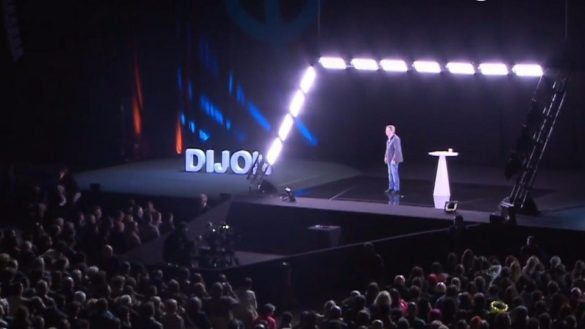 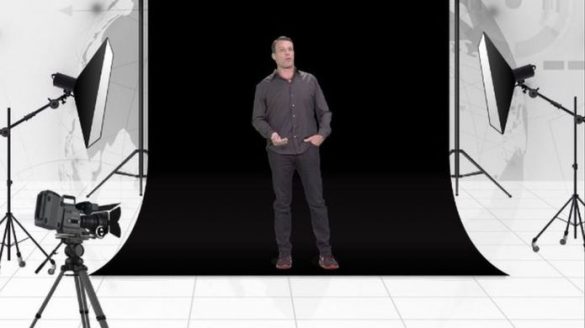 University classes are set to be given a futuristic spin by letting lecturers appear as hologram-like apparitions beamed in from afar.

Imperial College London will show off the technology at a special event later on Thursday before deploying it more widely.

It believes it will be the first academic body to do so regularly.

A similar effect has been used to animate images of Michael Jackson, Elvis Presley and other celebrities.

Imperial will initially limit its use to its Business School’s activities but expects the technology could eventually become common.

„The alternative is to use video-conferencing software but we believe these holograms have a much greater sense of presence,“ Dr David Lefevre, director of Imperial’s Edtech Lab, told the BBC.

„The lecturers have a high-definition monitor in front of them which is calibrated so they can point at people and look them in the eye. They can really interact.“

More than one person can also appear at a time.

Indeed, at the Women in Tech event on Thursday, a panel will feature two guests whose images will be transmitted from the US alongside a further two actually on stage. All four are expected to be able to intercommunicate.

Strictly speaking, the illusions are not holograms but neither are they the Pepper’s Ghost effect used by politicians including French presidential candidate Jean-Luc Melenchon and India’s Prime Minister Narendra Modi as well the entertainment industry.

Instead, they use a technique developed by a Canadian company, Arht Media.

„The problem with Pepper’s Ghost is that it can be intricate to set up and can cost about £150,000 to run an event,“ said Dr Lefevre.

„This is simpler – you project upon a glass screen, and a backdrop behind it uses software to give it an illusion of depth.

„It runs at the low thousands each time, so for the first time universities can afford it.“

To send their image, lecturers need to use a „capture studio“, which involves filming them against a black backdrop while being lit from both sides.

Imperial plans to make use of two external studios – one in Los Angeles, the other Toronto – as well a portable kit to invite overseas-based guest speakers to give talks to its students.

In addition, it intends to use the equipment to let one of its lecturers give a presentation to a Spanish business school in February.

Beyond providing a less disruptive means of attracting foreign talent than flying them in, Imperial says there are other advantages.

A popular invitee can be beamed to several lecture halls simultaneously.

Talks can also be recorded and played back for later use, although this would rule out interactions with the audience.

The downside is there is less likelihood guests will stay around for a chat once their scheduled appearance ends. Plus there is always the risk of a technical hitch.

But Imperial believes the benefits should outweigh the drawbacks.

„It’s going to be one of those technologies that gets used,“ Dr Lefevre said.

„So long as the technology works the way we believe it will, I can see this becoming fairly mainstream.“