Check Out This Live Interview Between Two AR Holograms

8i and 8th Wall’s one-of-a-kind system lets you communicate with people around the world as realistic 3D holograms.

History was made this past week when 8i and 8th Wall broadcasted a live volumetric video interview between two realistic 3D holograms. The scene looked something like something out of a big-budget science-fiction movie. Only this was very real.

During the live event, 8i CEO Hayes Mackaman, 8th Wall CEO and Founder Erik Murphy-Chutorian, and moderator and AR/VR industry influencer Catherine D Henry talked about what it took to bring this one-of-a-kind interview to life and what it would mean not only for the future of AR but the future of communication in general.

Mackaman, whose company specializes in volumetric video, talked about replacing conventional 3D avatars with realistic holograms to instill a sense of “authenticity” between users. “That’s our focus. How do we bring ourselves? How do we get from behind our masks in the immersive spaces of today and tomorrow?”

During an interview with VRScout, we asked Mackaman to elaborate on his thoughts regarding “authenticity” in the digital age: “My focus is largely on making sure our humanity has a space in digital worlds. That’s not to say there isn’t room for humans to take on CG characteristics – think wolf/human/merman/caterpillar. But it’s just as important that we have the technology to create images that are indisputably you!”

According to Mackaman, these real-time volumetric holograms aren’t some laboratory experiment. The technology isn’t years away; it’s a commercial product available right now. During the live event, it was announced that the companies already have a major client lined up.

When pressed about who that client was, Mackaman said, “We are installing the technology with a household name customer in Japan. Unfortunately, I cannot disclose their name at this time. They’ll be focused on consumer mobile AR and enterprise VR applications.”

To bring these 3D holograms to life in the real world, Mackaman and his 8i team turned to webAR experts 8th Wall. The companies simple method of using QR codes to launch AR content without the need for dedicated apps was, in Mackaman’s opinion, the best approach to bringing live steamed holograms into a real-world environment.

“Our mission is to make AR available for everyone,” said Murphy-Chutorian during the live demo. the CEO then talked about how 8th Wall provides powerful tools for developers, agencies, and marketers so they can easily build out their own webAR experiences using technology like image targets, world effects, and face filters. “One of the nice things about 8th Wall is because it’s on the web and is on mobile phones, 8th Wall provides the world’s largest platform when it comes to AR. Up to 3.5 billion smartphones can access us.”

At that point, it was time for the demo. Both Henry and Mackaman stepped into a green screen room where the two made technology history.

To view watch the live interview in real-time, attendees were asked to scan a QR code using their smartphones, which automatically redirected them to a webAR page featuring realistic volumetric holograms of both Henry and Mackaman. From here, Henry continued the interview and talked with Mackaman about the importance of holographic technology.

“Anytime you need authenticity, like when it has to be this person delivering this message. Or if we need human connection within this messaging or this experience. If that is something you desire, this is the way to achieve it,” said Mackaman in his holographic form.

Another interesting feature called “Conversational XR” allows you to speak with these holograms remotely in real-time. At the moment, the team is working diligently to bring support to WebXR. “Currently there are limitations on the number of simultaneous viewers you can support through that protocol. However, as our system stands today you could certainly talk with 1-5 people in real-time,” said Mackaman.

Capacity is a much different story, as Murphy-Chutorian explains: “The number can be incredibly large and can handle simultaneous screening at hundreds of thousands of views from around the globe,” adding, “The key piece is that it really is global. It really becomes a live stream in the way you can watch live stream video everywhere, only this is live stream holograms.”

As for putting a motion capture studio in your home or office, you’ll be happy to know that these green screen studios are indeed portable to an extent. That said, the setup process isn’t exactly consumer-friendly. Thankfully, 8i has people who can help you with that. As for the price of this game-changing system, well, that depends.

“If you’re making an outright purchase of the capture studio, software, etc the costs vary depending on the number of cameras and computers. Those costs range from $350,000 to over $1,000,000. After installation, we use a consumption model based on gigabytes streamed to users to determine the monthly usage fee.”

If purchasing a studio isn’t in your budget, you can always rent. 8i operates several green screen studios located in Tokyo, Seoul, Bangkok, Brisbin, Chicago, and Los Angeles, with an additional location coming soon to Orlando. The cost of these services will vary depending on your time spent in-studio and the total number of viewers.

Moving forward, it’ll be interesting to see how 8i and 8th Wall’s holographic communication system will continue to evolve. You can check out the hologram interview in 2D or experience the magic for yourself in webAR here. 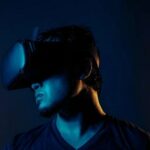 Democratizing The Metaverse: One Vision Of An Accessible Future For AR, VR, Virtual Events, And More 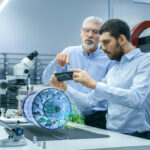 How Virtual and Augmented Reality is Transforming Industrial Manufacturing