The augmented reality training sessions for nurses (Gemini Research, 2017),  the MIT museum, Chinese museum, BBC frozen planet and the immersive experience of the Eurostar train (Eurostar, 2017)  make  people wonder what the future holds in store for educators, which new immersive technologies will be available and how they can be used to augment human experiences. Holography is considered a central theme of augmented reality. But how does it work and what does it really mean? Social media guest blogger Chryssa Themelis takes us behind the scenes, and offers her vision of the future.

A holographic image is composed of light-wave interference patterns. The interference patterns are created by splitting the beam from a laser, sending half to the subject (the object beam) and half directly to the photographic plate (the reference beam). The light reflected off the subject recombines with the light that went directly to the plate, creating a unique pattern of light-wave interference. After the recorded image is processed, the appearance of a 3D subject can be recreated by illuminating the photographic image with another laser beam (Kroon,2012). Hologram often depict an object or subject as a 3D image, using sophisticated laser projectors. Many other methods have been invented to develop holographic images or even video projections.

The Hungarian-British physicist Dennis Gabor was awarded the Nobel Prize in Physics in 1971 for his invention and development of “the holographic method”. The technique as originally invented is still used in electron microscopy. It facilitates biomedical research to investigate the detailed structure of tissues, cells, organelles and macromolecular complexes. Development of the laser popularized holograms starting in the ’60s. and grow rapidly since then. A hologram of a hand reaching out of a store window at the Cartier Fifth Avenue flagship captivates passersby in 1972. Princess Leia is presented holographically in Star Wars in 1977, National Geographic becomes the first mass circulation publication to put a hologram on its cover in 1984 and Designer Alexander McQueen caps his fall fashion show with a hologram of model Kate Moss in 2006 (Bloomberg, 2012). The list becomes endless especially after the invention of HoloLens in 2015.

Holography could play a major role in all levels education. Educational research shows that it could be linked to the theory of embodied cognition (Lakoff & Johnson,1999), facilitating the interaction and understanding because AR could give the human brain a sense of immersion (Invitro, Spada, and De Paolis as cited in De Paolis & Mongelli 2015). Holographic technology could be implemented for:

In the 21rst century, holography as new experiential approach, aims to unlock users form the 2D-limited world.  Alex Kipman, a Microsoft inventor, talks about “the dawn of the age of holograms” in a 2016 TED presentation and claims that we spend many hours per day looking at screens, but interactions and connectivity are limited. He points out: “We are like cave people in computer terms, we have barely discovered charcoal and started drawing the first stick figures in our cave “(TED, 2016).

Kipman, A. (2016, February). Alex Kipman: the dawn of the age of holograms [Video-file].  Retrieved from https://www.ted.com/talks/alex_kipman_the_dawn_of_the_age_of_holograms 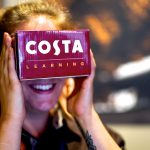 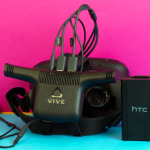