Facebook, which already employs some 60,000 people, announced a massive expansion of its workforce in an effort to get a head start in building the metaverse. The company says it aims to hire 10,000 new employees, all in the EU.

The metaverse is loosely defined as a sort of immersive internet where virtual experiences and worlds share some level of connectivity, interoperability, and identity (ie: a shared avatar across experiences). Facebook believes that the metaverse, alongside AR and VR, represent what it often calls the “next computing platform,” which it has been aiming to get an early grip on ever since it acquired Oculus back in 2014.

If the company hadn’t already made it abundantly clear that it believes that the metaverse is the next major tech landgrab, it definitely has now. This week the company said it will hire a staggering 10,000 new employees over the next five years in order to support its effort to get a head start on building the metaverse.

“No one company will own and operate the metaverse. Like the internet, its key feature will be its openness and interoperability,” the company wrote. “Bringing this to life will take collaboration and cooperation across companies, developers, creators and policymakers. For Facebook, it will also require continued investment in product and tech talent, as well as growth across the business.”

To that end the company is planning to grow its workforce by nearly 17% with a hiring spree that will create “new high-skilled jobs” that will support its metaverse efforts.

Beyond racing toward its vision of the next computing platform, the jobs announcement makes clear another priority—growing the company’s political influence in the EU.

According to Facebook, all of the 10,000 newly created roles will seek hires living in the EU; not coincidentally company believes that “the EU […] has an important role to play in shaping the new rules of the internet. European policymakers are leading the way in helping to embed European values like free expression, privacy, transparency and the rights of individuals into the day-to-day workings of the internet.”

Specifically the company says, “We hope to see the completion of the Digital Single Market [Wikipedia] to support Europe’s existing advantages, as well as stability on international data flows, which are essential to a flourishing digital economy.”

With the offer of 10,000 new tech jobs in the region, Facebook is surely securing itself some leverage in the discussion of internet policies and regulations with will impact both its existing online business and its future metaverse aspirations. 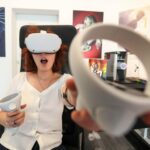 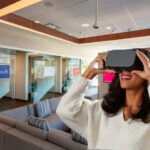 Bank Of America Turns To VR For Soft Skills Training