Changes in education can prompt strong emotions, never more so than when it involves new technology. But while the 3Rs undoubtedly remain at the centre of learning, VR is poised to play an increasing role.

Virtual reality has been around since the 1960s, and most of us could easily draw a line from efforts around flight and surgery simulation or product design in the 1990s to the current day. The technology certainly has enough of a history to have generated serious research on exactly how VR, or immersive learning, can deliver tangible benefits for students.

A World Economic Forum meta-analysis of studies into immersive training at a variety of levels suggested that students were on average 30 per cent more efficient per hour of VR training, compared to students exposed to an hour of traditional training. VR-trained students also showed 20 per cent “higher levels of confidence and self-efficacy towards learning” compared to counterparts taught the same content via traditional methods. Research by Accenture cites up to 75 per cent improvement in retention rates when learners use immersive learning.

The studies covered by the WEF analysis stretch back over a decade. But the technology has improved immeasurably over that time.

As Brian Moynihan, Lenovo’s Global Education Solutions Manager for Immersive Learning, explains, advances in mobile technology spurred the development of very high-resolution, small screens that don’t overheat, as well as accelerometers and other sensors. Lenovo’s VR Classroom 2 platform, for instance, centres on the Android-powered Mirage VR S3 headset, which offers 1920 x 2160 resolution per eye, with a 110 degree field of view. It has 64GB of onboard storage which can be expanded to 256GB using an SD card.

Together with developments in computer power and comms technology, this all addresses the latency issues that meant, going back five years say, VR experiences might have left some users feeling, well, let’s just say unsettled.

But, says Moynihan, getting the most out of VR in the classroom demands a “whole solutions approach…it’s not just about a piece of hardware.”

Device management is crucial. Once an individual educator or an entire institution has more than a handful of headsets to worry about, they need some sort of central control – both to manage the headsets and to distribute content.

So Lenovo’s headsets are backed up by its ThinkReality platform, which allows IT admins to manage both the deployment of apps and content and management of the headset, and LanSchool Air, which is specifically designed to allow teachers to manage both apps and student activity, including remotely.

“You can easily take content and put it on headsets no matter where they are,” Moynihan explains. “So whether they’re in the same room or around the world, with a few clicks you can push out content to those headsets.” And of course, teachers need to be able to ensure that all their students are seeing the same content AND to pull content back if necessary.

There are other more mundane issues that must be considered. Clearly any piece of kit that’s going to be handled by a succession of youngsters – or indeed adults – over the course of a day needs to be both ergonomic and ruggedised. And, Covid has highlighted the fact that they need to be easy to clean, over and over and over again.

So immersive technology is at a tipping point, with a technology that has come of age over the last few years, clear evidence of its potential to augment traditional training, and an educational sector in the midst of massive disruption because of the Covid pandemic.

But while hardware performance and manageability are important, what really counts is how children engage with VR. One of the flagships for Lenovo’s VR technology is Henry Tyndale school in Farnborough, UK, which caters for students with a wide range of complex learning difficulties. During the 2020 lockdown Henry Tyndale remained open for its students, though necessarily they had a more restricted experience than usual.

So, a team of Lenovo staffers went into the school to run one on one sessions with students using the Mirage VR headset and the Wild Immersion app, which provides a range of safari experiences recorded in Africa, Asia or Amazonia. While some children were initially startled by the experience, the teachers felt it ultimately sparked all their students’ curiosity. More importantly, perhaps, the school is now working on creating its own experiences to help children, particularly those with autism, prepare for everyday experiences they might find challenging.

“This idea of assisting children with special needs is one that I think is incredibly inspiring,” says Moynihan. “And there’s a variety of ways that special needs students can be served by virtual reality.”

This could be something as seemingly straightforward as helping a child prepare for their first day at a new school, or for a trip to the dentist. “You can take a 360 degree video and go to those spaces, and they can practice those things in a safe environment. It may seem like a small thing but it can change kids’ lives.”

From there, it’s an easy step to see how the technology can help prepare students – and adults – for situations that might make them anxious. For example In the US, Walmart has used the technology to help prepare new hires for Black Friday. Similarly, when students are upset or angry, “they could have a little bit of time and a VR headset, where they could reflect or do something meditative that can lead to better outcomes for students as they learn to manage their emotions”.

What really counts is how children engage with VR

Welcome to the real world

All these examples illustrate what Moynihan says is one of the great advantages of VR; how it can reach people in all sorts of different ways.

“There’s sort of a myth that some people are visual learners, and some people are auditory learners,” he says. “But what is true is that those multiple intelligences are real and true of all of us.”

While traditional learning approaches might focus on one mode – usually the largely auditory lecture – VR is by its nature multimodal, encompassing vision and sound, as well as emotional, social, and, potentially, tactile elements. “If you can combine those things together, then it helps everyone,” says Moynihan. “That’s really a place where I think VR really shines.”

That’s assuming the content is up to the job of course. Moynihan says previous generations of educational content were often of the “Hey, look what I can do” variety.

That has changed dramatically, says Moynihan, with the best content squarely aligned with learning objectives. Lenovo, for example, partners with Veative which produces a vast range of modules mapped to curricula across different countries, predominantly in STEM subjects.

“One of the things that’s really cool about VR is that you can take the same module, and you’ll teach it in different ways,” he says. For example, a teacher might use purely visual immersive content to show younger children the principles behind photosynthesis, but for older children they can also supplement it with quizzes and other supplied content.

And he adds, by its nature, “VR tends to be all encompassing, it’s just the one thing you’re doing. You’re not tempted to check your email; you’re not getting text messages as you’re doing it.”

Crucially, he says, educators and students increasingly have the ability to create their own content.

“It’s the beginning of a new literacy. And it’s that sense of empowerment. And everybody feels like there’s this distance, this unbridgeable gulf between where they are and where they need to be to make something in VR. But it’s getting easier and easier to create your own immersive experiences.”

That inevitably raises the question of how VR overlaps with augmented reality (AR) or extended reality (XR) headsets or glasses and even, depending on your attitude to the likes of Elon Musk, neural implants and interfaces.

This where VR in the classroom starts preparing children for the Spatial Web, Moynihan says, the idea that technology means digital information will exist in space, and users will interact it through XR, as well as haptic wearables, and other devices from IoT sensors right through to robots and autonomous vehicles.

“I think VR stands on its own right now, it’s this exceptional thing,” concedes Moynihan.

But considered as part of a spectrum with AR, says Moynihan, it will become core to what we all do in terms of learning and skills acquisition from primary education right through to ongoing training. And it will increasingly change how we do our jobs whether that’s surgeons carrying out procedures remotely, or plumbers and technicians fixing problems in the field.

Ultimately, says Moynihan, the vision is not for VR to “replace” real life. “But I do think that it’s going to be integrated with everybody’s life.”

VR is by its nature multimodal, encompassing vision and sound, as well as emotional, social, and, potentially, tactile elements 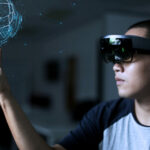 Will the Metaverse encapsulate the future of digital entertainment? 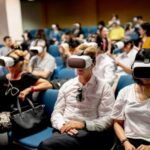