Social VR Platform ‘ENGAGE’ Generated Over $1.4M in Revenue in First Half of 2021

VR Education, the virtual reality software firm behind ENGAGE, has reported a significant uptick in revenue generated by the social VR platform so far this year, with revenue from Engage in 2021 nearly doubling over the same period last year.

The Waterford, Ireland-based company has created a number of bespoke educational experiences over the years alongside its most successful product, Engage, which targets companies using it for things like virtual training, simulation, education, and online events.

Publicly traded companies working on VR are typically very large and diversified to the point where picking apart financials doesn’t always provide meaningful data. An overwhelming majority of companies working in the industry are however privately held, and therefore not obligated to specify their wins (or losses).

But VR Education is a fairly unique case in the industry. As a small to medium-sized company publicly listed on both on Euronext Dublin and London Stock Exchange, it’s not only obligated to give stock holders a peek into the financials, but it also conveniently serves as a strong watermark to see just how things are moving in VR.

To put that into perspective, in 2020 the company reported an annual total revenue across all products at €1.42 million (~$1.68 million). With a global pandemic bottlenecking most in-person business though online communication platforms, it seems VR Education has managed to capitalize.

And the company seems to have a fair bit of runway ahead of it too. In June the company announced it had raised €9 million (~$10.7 million) which will help it launch its Oasis metaverse platform—said to be a “fully featured corporate metaverse” where companies can meet and sell products and services directly to each other.

Engage is available across a host of VR devices including SteamVR headsets, Oculus Quest, Vive Focus Plus, and Pico headsets. It also supports mobile devices running iOS and Android, and traditional PC monitors. 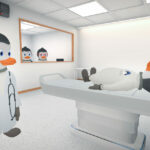 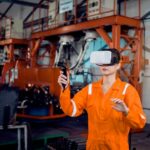 The Basics Of Employee Training Through Simulation