Bodyswaps: A Q&A with Christophe Mallet, CEO and Co-Founder of a VR Job Interview Simulator

Bodyswaps have just released a VR job interview simulator and during this interview we catch up with the CEO and Co-Founder, Christophe Mallet, as he shares his plans for the coming months, his thoughts on VR and the challenges facing the FE/HE sector when it comes to interview training.

What do you think are the challenges for the Further and Higher Education sector when it comes to interview training?

Job interviews can be life-changing events, but many students don’t seek help preparing for them. Only about a third of graduates have completed even a short, 10-minute mock-interview with a careers counsellor before their first real interview.

And educational institutions often leave it to the student to request help because they don’t have the resources to give everyone the time and attention that mastering great interview skills needs.

What are your plans for the coming months?

We’ve just released our Job Interview Simulator. With it, every student can have the opportunity to explore game-changing interview skills like using your own characteristics and strengths as evidence of suitability for a role; fine tuning verbal and non-verbal communication; and mastering techniques for delivering compelling and impactful answers.

We’ll be working with partner institutions in the UK, Canada and France to measure engagement and learning performance, and to help us find the best way to integrate it with their existing methods.

We’ll also be conducting double-blind studies with psychologists using control groups and mock-interviews to evaluate how effective the Bodyswaps Job Interview Simulator is at improving performance.

What can a VR job interview simulator offer students that online or traditional training can’t?

VR goes beyond other types of online training because it allows you to feel the heat!

It’s impossible to recreate the high stakes and psychological pressure of a real job interview in a classroom or self-video interviewing tool. But the illusion of physical presence that you get in VR is the next best experience to the real thing. When your headset goes on, you are in an interview room with a stranger, who is waiting for your response. So, you have to think fast!

Yet, VR is also a safe place to develop self-awareness without feeling self-conscious. You can speak and move the same way you would in a real interview or role-play situation, but instead of worrying how others will judge you, Artificial Intelligence is recording, analysing and repackaging thousands of objective data points to give you hyper-personalised feedback.

You can even switch perspectives with your virtual interviewer and watch your performance from their point of view to see how you really come across.

In this way, learners can see their skills improve and build self-confidence as they improve the content and delivery of their message.

Do you think a VR based approach would be the best option for everyone or would it be more suited to certain personality types?

I don’t think there are VR personalities per se. However, different levels of tech-savviness mean different deployment modalities. For students who already own headsets, simply making the software available and asking them to practise autonomously will work. But for everyone else, VR is still a new technology, which can be quite daunting. So, it helps if their first session can be facilitated, face to face.

What have you learned from the project with the ‘innovation partners’ (FE)?

The market for young people’s attention is a tough one! We learned a lot about making our content more concise and our UX more intuitive, to keep engagement levels high enough for learning to stick.

We also confirmed that deploying a new technology requires significant resources beyond mere software licensing. Institutions about to embark on their VR journey should ask themselves the right questions: who will recruit and onboard students? Who will manage the fleet of headsets? Who will facilitate the sessions?

Finally, we learned that it is worth the effort! Students in our pilot reported being engaged, identifying ways to improve and gaining in confidence. There was a strong appetite for repeated practice, so it’s crucial that VR doesn’t become a one-off gimmick. Instead, VR should become part of the blend offered by the careers’ team, or better still, a part of the curriculum itself. 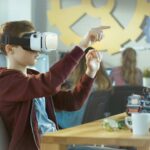