Our pick of AR Remote Collaboration and Support Services

A discussion of AR remote platforms and use cases that got our attention this year.

AR remote collaboration solutions are those that superimpose virtual elements over a user’s view of the world around them, while allowing them to communicate with coworkers, experts, or even devices. These solutions employ either a dedicated AR headset or a compatible mobile device like a smartphone or tablet.

A Note on Some Names Not Listed

Before we get started, a few light disclaimers. After all, AR, and AR remote collaboration in particular, is a huge industry that is rapidly changing and there was no way we were going to catch everything in this article. To try to narrow things down, we deliberately excluded some adjacent topics.

Most AR headsets are compatible with video conferencing solutions, but not all of those headsets are listed here. Instead, this article will stick to discussions of dedicated software solutions for AR remote collaboration with a focus on enterprise use cases.

Similarly, a number of enterprise AR solutions utilize the basics of AR – digital information or graphical assets overlaid on the user’s field of view – in ways that are not collaborative. A headset that uses virtual screens could be an enterprise AR solution without being collaborative, as could a training software that a user employs on their own non-connected device.

CareAR has been around for a while but made waves earlier this year when they were acquired by Xerox. Already a powerful tool, the field service enablement platform has only improved, according to CareAR Vice President and General Manager Samantha Wilmot.

“[The acquisition] is enabling us to scale our innovation and reach,” Wilmot said in an interview with ARPost. “The Xerox expertise in AI, RPI, and predictive analytics really ally with our expertise in AR.”

Now integrated with ServiceNow, the platform initially intended for relatively simple AR remote support via instruction overlay and spatial annotation is being used for networking and knowledge transfer as well.

“Employees, in their hearts, really want to do a good job by their customers and they really enjoy using CareAR to help them do that,” said Wilmot.

Adoption and growth of the platform is part of an ongoing trend within industries, including Domino printing who launched their remote support platform SafeGuard AR in March.

Taqtile, specifically their Manifest platform, has been growing from essentially a virtual checklist to a more complete AR remote collaboration solution.

Currently in version 2.2, the platform allows users to connect with one another via video conferencing and to connect with enabled IoT devices. AR remote collaboration with IoT devices as well as low-latency calling in less-than-ideal locations and conditions are only likely to improve as the company is one of the most active groups in exploring 5G.

XMReality is a mobile-based AR remote assistance solution, though premium price tiers also work with AR glasses. When a user initiates a call, they share their mobile device’s view with a remote expert. The remote expert can then make notes and diagrams and even film their own hands and tools that appear as overlays in the caller’s display.

Using XMReality’s augmentation features require the app, but seeing the AR content doesn’t. So, in theory, a whole organization can benefit from the platform while only having a handful of application downloads in use.

The company offers free trials and platform support comes through three price tiers including a free price tier with limited functionality, so how you use XMReality can scale with the size and technical hardware investment of your company.

TeamViewer has been doing remote support through screen sharing and Pilot is their dedicated XR solution. Smart glasses are supported, but not required. The platform was even nominated for an Auggie Award for Best Enterprise Solution last year. And that was before acquiring digital workflow company Upskill in March.

The platform works a lot like XMReality, but there are some feature trade-offs. TeamViewer doesn’t have that neat hands-overlay feature, but it does allow persistent environment notes, file sharing, and character recognition.

Pilot also has a free trial period as well as one simple subscription price with all available features for $40/month.

Spatial is a complete mixed reality solution, depending on how you access it. The platform, which won last year’s Auggie Award for Best Enterprise Solution, is compatible with MR headsets like HoloLens and Magic Leap. It’s in beta for tethered VR and Nreal, though it also works with iOS and Android devices as well as via browser.

With Spatial, users create a near-photorealistic avatar from an uploaded image of themselves. Users can then interact with remote collaborators using virtual spaces, tools, and assets. The platform is also integrated with popular cloud services and workflow applications.

There are two premium price tiers with additional affordances, but there is also a free model with an easy sign-in using a Microsoft, Google, or Apple account or with a private email.

Holo4Labs is focused on research and development in industrial settings and was another Auggie nominee for Best Enterprise Solution. While Spatial did take that award, the year before that the Polish startup was honored as the Best Innovation Initiative by Emerge Europe.

Holo4Med is focused on healthcare solutions. It incorporates a number of the solutions presented in Holo4Labs as well as ramping up remote collaboration features, workflows, and other medical-tailored applications. The platform was also mentioned in ARPost’s article on companies that have directly contributed to combatting the COVID-19 pandemic.

Both of these AR remote collaboration solutions use HoloLens and Azure to provide a rich mixed reality experience populated by smart devices and persistent world annotations. Users can communicate directly through video-calling and other direct collaboration tools, as well as by leaving messages in the environment and through other connected devices.

The Varjo and Laerdal Partnership

TechSee and Vuzix (and Microsoft)

TechSee is an AR solution that employs augmented reality to identify and contextualize objects in the physical world. Essentially, it serves as a passive, always-on, real-time search-by-image browser. Think of it as an optical reverse encyclopedia.

There was discussion on whether or not to include TechSee in this list because, while it does serve as AR remote assistance, that assistance comes from AI rather than from a remotely connected human expert. The end takeaway of ARPost’s backroom discussions was that machines that can learn and be intelligent can be collaborated with.

It doesn’t hurt that, while TechSee has historically been employed on smart devices like phones and tablets (and it still can be) the company recently partnered with AR headset manufacturer Vuzix. Incidentally, Vuzix also supports Teams, Microsoft’s remote conferencing platform.

Microsoft Mesh is on the bottom of our list because, as of this writing, not just anyone has access to it. However, the highly anticipated MR/VR/AR remote platform launched at Microsoft Ignite 2021 is definitely worth talking about.

The platform incorporates VR elements as well as real-time volumetric capture. The result is that humans can appear holographically in virtual environments or virtually in physical environments. Like Varjo, Mesh blurs the already unclear lines between MR, VR, and AR remote collaboration.

Like we said at the top, the AR remote collaboration and assistance landscape is going crazy right now. We tried to run the gamut from industry to medical and from lightweight and free to subscription-based powerhouses, but this article was never going to catch everything. These are the platforms and services that caught our attention this year, but keep an eye out for more. 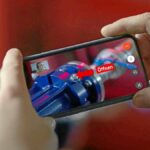 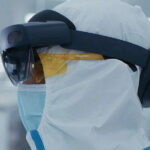