ThirdEye Gen Exploring Drone Partnerships for EMS and Enterprise Use

One of the most exciting and intimidating things about working in emerging technologies is when two seemingly unrelated use cases come together. So, when Nick Cherukuri, CEO and founder of ThirdEye – a company known for AR enterprise and EMS support – called to talk about drones of all things, it was a little surprising.

So, I brushed off my notes on ThirdEye and brushed up on drones.

What Has ThirdEye Been Up to?

ThirdEye has been a dedicated enterprise XR company since before it launched its first-gen headset at CES in 2018.

Their second-generation headset launched the following year and was a finalist for Best Headworn Device at the Auggies last year. The X2 lost the award to the much-anticipated light-weight consumer model Nreal Light, in what was arguably an apples-and-oranges competition.

The last time ARPost talked with ThirdEye was in January. Among other updates, the company had just rolled out its RespondEye tool – a remote assistance platform specifically tailored for first responders and EMS personnel. The medical field had long been a ThirdEye area of interest, but it has become its own target market since the outbreak of the coronavirus.

“Healthcare has always been a big focus for us, but COVID has really shifted our focus,” Cherukuri told ARPost in January.

It was innovation by these users that would bring about the drone discussion in April.

Where Do Drones Come In?

Most practical drone applications use cameras and other sensors on the drone to give the user on the ground a better understanding of remote situations. In the case of EMS personnel, this can provide vital situational awareness including identifying environmental hazards before approaching a potentially dangerous situation.

Most drones are flown using a dedicated hand-held device or a paired app on a mobile device. This creates a situation in which the operator has to look down at their device to see what they need to see from the drone’s point of view but they also need to look up at the drone in order to pilot it.

Innovative users in the EMS field realized that their drone applications and ThirdEye are both built on the Android operating system. A little techno-wizardry, and they were able to get the drone’s feed on their ThirdEye glasses allowing them to see the drone and the drone’s POV simultaneously.

“The advantage of AR and drones is that it allows the user to maintain positional awareness while flying the drone,” said Cherukuri. “This is a new and interesting use case that we did not expect initially, but it makes a lot of sense.”

EMS and law enforcement might have been the first ThirdEye users to identify the new use case, but they weren’t the last. Cherukuri has since seen clients in the agriculture and real estate industries adopt the same approach. He also sees opportunities for law enforcement and military applications – a handy idea considering ThirdEye has already worked with the air force.

“Whatever information the drone is able to capture, we are able to display on the glasses,” said Cherukuri. “Pretty much any industry that drones are used in, AR can improve.”

While Cherukuri described DroneEye as “a pretty seamless interface,” it’s also “not a custom operating system.” In an effort to improve the experience, ThirdEye has entered into talks with a number of drone manufacturers, with partnership announcements to be made throughout the year. Cherukuri even mentioned the possibility of “bundle packages.”

In the call, Cherukuri also said that ThirdEye would be announcing a new headset in Q3 of this year. So far the company has been enterprise-focused and, in the case of drones, this has helped the company stay out of some of the controversy involving casual drone use. People aren’t worried about EMS using drones to invade people’s privacy or damage property.

However, Cherukuri also mentioned a “lighter-weight version for other use cases” and listed “drone gaming” as a potential use case leaving the door open for potential consumer opportunities down the road.

The Convergence of Drones and AR

Drones and augmented reality are both new technological frontiers in which EMS and enterprises are finding value. It makes sense that users would compound that value by combining those solutions. It makes even more sense that ThirdEye is helping to drive that convergence. 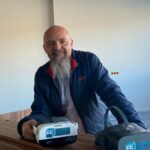 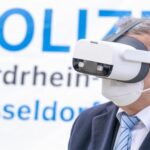