Oculus Quest developer Gerald McAlister has found evidence that an ‘Infinite Office’ feature might be coming to the Oculus Quest, including a ‘passthrough keyboard’ and ‘guardian couch’ capability.

As reported last month, McAlister found files indicating that the Quest may soon let you mark you couch as part of your guardian, and have it represented in VR with a virtual 3D model. This would allow you to use and sit down on the couch while in VR without having to take off your headset or look through the nose gap to check where it is.

In the newest v20 update of the Quest system software, McAlister found a new tutorial video file that shows a user tracing along the edge of their couch seating area, in a similar manner to how users set up their Guardian boundary. You can watch the video embedded in the tweet below, which suggests that the feature might not be far off release.

A 3D model of a whiteboard, similar in style to the one of the couch, was also found by McAlister in the v20 update, suggesting that some sort of whiteboard support via passthrough might also be on the horizon.

Finally, the “Passthrough Portal” feature from last month seems to now be called  “Passthrough Keyboard.” Users may soon be able to sit at their desk and work in VR, using a keyboard that’s brought into the virtual setting by displaying the image from the Quest’s passthrough cameras, alongside Bluetooth connectivity.  A keyboard tracking APK suggests that some of these features would be available to more than just the system apps too.

There’s indications that this is all part of an “Infinite Office” feature set currently being tested internally at Facebook already, which would potentially allow the Quest to essentially become a mixed reality virtual workspace. Some hints suggest this could be bolstered by a new “HD Passthrough” upgrade as well.

It’s unclear if any of this features will actually see the light of day, whether they are intended for the current Quest, or potentially just the upcoming new Quest model. With Facebook Connect just around the corner, it’s possible we’ll learn more very soon. 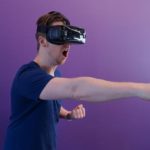