SoCal Patients Use Imagination To Control Pain With VR

Teresa Lipot enjoys swimming as a way to connect with nature.

Unfortunately, a medical condition has rendered the 62-year-old woman unable to go in the water for the past several years.

Virtual reality technology, or VR, recently introduced by Hoag Hospital in Newport Beach has allowed Lipot to experience an underwater swim in the ocean while reducing pain and stress at the same time.

Hoag, which in 2015 introduced VR technology in operating rooms, has begun using the technology with patients to reach areas of the brain that affect sensations such as pain, said Dr. Robert Louis, chair of neurosurgery.

Hoag is one of the first hospitals in the nation to offer this VR treatment outside of clinical trial settings. The hospital is seeing positive results, Louis said.

“We can see that all on functional MRIs,” he said. “When you see the before and after, it’s amazing.”

While in the hospital in May, two nurses introduced Lipot to the technology, which involves wearing a headset nearly identical to those used by gamers.

“I was more than happy to try it,” Lipot said. “I would probably equate it to very affordable hypnotherapy.”

On a scale of one to 10, with 10 being the worst pain, pain can be reduced by five points through the use of VR experiences, Louis said.

With such significant reductions in pain, there is less need to use opioids to help reduce pain – thereby reducing the possibly of opioid addiction.

“Each time we can lower the dose of opioids, we can prevent maybe one more person from becoming addicted,” Louis added. “We’re losing 50,000 a year in the US to opioid overdoses.

While a significant number of patients have experienced a “substantial reduction in pain,” the technology doesn’t work on everyone, Louis said.

Some of the new VR technology used by Hoag involves educational video games that center around how pain works, Louis said.

“Understanding pain is one of the key features,” he said.

In another VR program, patients wearing a headset are shown dead tree. They are instructed to take long, deep breaths as a microphone that records the depth of the breaths. As the patient’s breathing relaxes, the tree begins to grow and blossom and come back to life.

Lipot calls swimming her “happy place,” but hasn’t been able to enjoy the therapeutic activity for 10 years.

When she made eye contact with a whale in the VR setting, she found herself “literally crying.”

Dr. Robert Louis, a neurosurgeon at Hoag Hospital in Newport Beach, takes notes while demonstrating new virtual reality headset to a patient. The technology, which allows patients to immerse themselves in a variety of experiences, is being used to help reduce stress and severe pain. (Courtesy of Hoag Hospital) 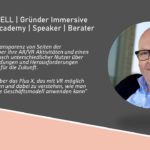 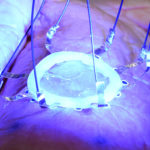