At a special event in Taipei, Taiwan, HTC cofounder and former CEO Peter Chou today revealed the first products from the new startup XRSPACE. It’s serving up both its own 5G-enabled standalone VR headset as well as a new social VR platform which appears to compete with Facebook Horizon.

Chou sees XRSpace serving the upcoming era of widespread 5G; much like how smartphones first arrived on the back of the 2.5G network in the early 2000s, the former HTC CEO sees the company’s headset, Mova, and its social VR platform, Manova, taking human interaction “to a new level” and offering more connectivity on a person-to-person level. And XRSpace is planning to bring it to the mass market.

Mova is a standalone VR headset that does away with motion controllers, instead offering optical hand tracking which users will use to navigate UI and interact with others online. Like Samsung Gear VR and Oculus Go, the headset only includes a single remote, which appears to have a touchpad and button array for basic input.

XRSpace is taking an interesting route with its hand-centric design philosophy, as the company is looking to appeal more to a wider set of users who aren’t necessarily gamepad savvy. Along with optical hand tracking comes room-scale tracking, making Mova closer to Oculus Quest or Pico Neo 2 in function.

Its optical sensors are also capable of room scanning, the company says, making a photorealistic version of your play space by uploading textures and depth data to the cloud for processing.

Hardware specs are still not entirely clear, however Mova is said to offer 5G, LTE and Wi-Fi connectivity built on the back of a Qualcomm Snapdragon 845 chipset. The company claims a 20% reduction in weight over Oculus Quest, a larger battery, greater DPI display (no resolution just yet) clocked at a 90Hz refresh rate.

The company will first offer a developer kit; there’s no word on pricing yet, although XRSpace says it will reveal more closer to its launch in June. A consumer version of Mova is said to arrive sometime in Q3 2020. You can signal your interest on the company’s website starting today.

Manova is looking to offer many of the social VR mainstays too, including a personal cinema and meeting rooms for remote work, however it also promises a busy city center, night clubs, and multiplayer mini-games. It will also offer premium 2D and 360 video content from its operators and partners.

The social VR platform is said to integrate an avatar creator which lets you make a full-body avatar from a single selfie, something XRSpace Head of Design Chris Lin says will look “just like you.” Avatars, Lin says, include high-quality skin textures, a facial expressions system, and an AI-driven contextual awareness system so your avatar will more realistically react to other users around it. The headset is also said to offer full body tracking, but how that’s possible with front-facing optical sensors, the company has yet to say.

At this point, Manova feels more like a conceptual wishlist than a functioning social VR platform as such. Many of the activities seen in the announcement video are questionable in their practicality, or even arguably useless in a virtual context. That said, XRSpace has partnered with the likes of Qualcomm, Deutsche Telekom, Chunghwa Telecom, GQ, Vogue, and Getty, and it seems to be grabbing the bull by its horns in a time of remote working, social distancing, and everything in between as the world adapts to the new normal. 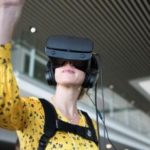 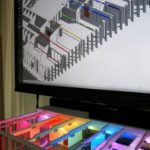