I’ve been involved in remote work for over a decade, but having worked in small and local companies, I only got into remote meetings around 2014. In 2016 I dove into the deep end of the pool: I set out to become Finland’s best remote facilitator. I would soon find out, though, that I had little competition within our borders.

There are professional facilitators and facilitation trainers; and there are skilled remote workers in all industries. But few people combine these two domains so they might facilitate workshops remotely. After studying facilitation for a few years and trying to apply it through Skype for Business, Google Hangouts, and many other meeting platforms, I’ve started to understand why remote facilitation is so rare.

Here’s the catch: In a remote meeting it’s too difficult to establish shared context, a shared goal, and psychological safety in the group — all of which are the cornerstones of good communication and good decision making.

With current remote meeting tools it’s too difficult to ensure a good meeting outcome. We need to do better. That better way is called spatial meetings.

As I’m fairly new to the remote meeting scene, I’ve mostly avoided the “teleconference era” of remote meetings. The word teleconference alone raises the hair on my neck. It brings to mind a certain satirical video (embedded below), which is a bit too close to the truth about many meetings.

The past decade has been all about video (and collaboration, to a lesser degree)

During the 2010s the remote meeting scene has started to change. The usual suspects — Microsoft Lync, Cisco WebEx and GoToMeeting — got a lot of new competition. In 2011, for example, the founder of Zoom believed that then-current remote meeting software did not make customers happy— it could be much better. Today, Zoom has more than 70 000 corporate customers, and it continues to grow fast. Their revenue was $330 million in 2018 and $610 million in 2019, growing 84 % in a year.

Zoom is popular because it makes meeting remotely with video quick, easy, and reliable. Others, like Adobe Connect, provide the tools to conduct online training and workshops with the help of digital whiteboards, slides in PowerPoint or PDF format with annotation capabilities, and the possibility to work in multiple virtual rooms simultaneously. However, solutions like Adobe Connect are expensive, and the learning curve is steeper, which is why they haven’t become mainstream for meeting use.

Modern video meeting apps, like Microsoft Teams, Google Hangouts or Zoom, do wonders for 1-on-1 meetings, and improve small group meetings with 3–4 participants. More robust solutions like Adobe Connect scale better for interactive sessions with larger groups. Video meeting apps can be combined with other software, like Miro or Mural, to create permanent digital workspaces with drawing, text, sticky notes, and voting capabilities.

However, even great apps don’t make meetings run by themselves.

Good meetings should, at the very least:

That means someone still has to plan and prepare the sessions, learn how to use the software, know how to include all participants in the discussion, and document the results, to name a few key ingredients.

Shameless plug: I train these skills for a living. 🙂

No technology is going to magically fix bad meetings, but I do see a paradigm shift coming that will make remote facilitation more accessible.

In 2017 the Oculus Connect event caught my attention. Watching the livestream did weird things to my head. I saw glimpses of a future where video meetings seem old-fashioned and limited by comparison. Until that point it had been difficult to see remote meetings make business travel obsolete — but now, suddenly, the future of remote meetings was staring me in the face.

One year later, I had the honor to present at the unveiling of Glue, a VR-based meeting and collaboration tool. The thrill of facilitating in VR for the first time is difficult to describe. It was a childhood dream come true. I witnessed science fiction become reality.

Glue has come a long way since its launch in November 2018: text input is easier; you can summon whiteboards and attach sticky notes to them; avatars are more expressive; and it runs smoothly on VR headsets, mobile devices and even the desktop computer.

Today, Glue also has competition. I’m most familiar with meetingRoom from Ireland and MeetinVR from Denmark. But new apps are now being created at a furious pace and before long you will have as many meeting solutions to choose from as with video meetings today.

So what’s the big deal with spatial / VR meetings?

I mused about the future of remote collaboration back in May, just before the Oculus Quest launched. I’ve now had the Quest myself for a couple of months and my feeling about the future is even stronger: spatial / VR is a game changer. But why is that?

Remote collaboration still feels unintuitive, even with the best apps in the market. Even with video on, it simply doesn’t feel like you’re in the same room, which makes understanding each other difficult. It makes building trust difficult. It makes decision making and commitment to said decisions difficult.

When we share a space in VR, we really inhabit it. We have avatars whose head and hand positions correspond to those in real life. This allow us to gesture like we do when meeting face to face: we can wave, nod, shake hands, high-five — and most importantly, we can point at things.

In virtual space, like in real life, the direction and focus of our gaze tells the other participants whether we are listening or not. Unlike video meetings, sound also has direction, which makes following the conversation easy and giving speaking turns intuitive.

Meeting in VR is so similar to meeting face-to-face that collaborating becomes intuitive. It’s difficult to say the same for any video meeting app.

When we enter a physical meeting space, the host may have prepared it in many ways: desks have been removed, chairs arranged, sticky notes or notepads placed on chairs, flipcharts placed along the walls. This gives participants important context for the session even before it begins.

In most video meetings, context is missing almost entirely. How many remote meetings have you attended where the host had a welcome slide for the participants? It would be nice to at least see the agenda, the participants’ names and roles, and the schedule; but that is rarely the case.

In VR, we can prepare the space as we might prepare a physical space. We can choose the size and layout of the room based on the number of participants and the nature of the session. Is it for training? Making decisions? Kicking off a project? You can prepare the materials and working instructions in advance, then lead the participants through the process once the session starts.

The first time may take a lot of effort, because we have to learn how the new medium works. But future sessions are a lot easier to prepare, as as you can simply copy the space layout with preparations, then modify them for your next event.

Suddenly, all presentation materials, notes, flipcharts, sticky notes etc. are digital, moveable objects. Arrange them however you want. Export them. Return to them in a follow-up session a month later.

This is an important point: our spatial memory is powerful. We remember very well the places we have been to and the experiences we had there. Think about your last holiday, for example. Where did you go? What did the hotel look and feel like? Where did you walk? What did the restaurant look like, where you had that delicious dinner?

Video meetings tend to happen in monotonous environments — they all look and feel the same, regardless of who’s there and what the meeting content is. Thus it’s harder to remember what we did. Tools like Miro or Mural help, but the barrier to entry is still too high.

In spatial meetings, each meeting room will be unique. Subtle differences in where and how the whiteboards, sticky notes and handwritten or drawn remarks are arranged remind us not only of what we discussed, but what we felt like when discussing it. It’s easier to remember why we decided to commit to a specific course of action — or why we hesitated.

Let’s face it, you’re distracted during remote meetings. I am, too. We all are. Remote meetings are so easy to set up that we often do it on a whim. We simply don’t take remote meetings as seriously as their face-to-face counterparts. (To be fair, before taking on my current job I had no idea how to do better, either. I had no point of reference.)

VR meetings, by contrast, are fully immersive. Once you pull on that headset and launch the app, you are transported to the meeting space. It’s impossible to be distracted by email, Slack, or texts while in VR. If you need to take a phone call, or do anything else, you have to remove the headset. You cannot leave the meeting discreetly.

This allows for better focus and lets us finish our work faster.

In fact, I claim that immersion and focus are even better than in physical meetings. After all, it’s a little too easy to get lost in your phone or laptop during meetings — especially if the meeting purpose or your role is unclear.

When multitasking is impossible, participants have to ask themselves: am I really needed here? Why? What is the purpose of this session and what is my role in it? Many too-large meetings can be cut down to the essential participants. Some unnecessary meetings can be avoided altogether. Work becomes more focused. Time becomes better spent.

Meetings should produce a lot of value. It’s a big time investment — not to mention the cognitive cost — for all participants. We may see that spatial meetings bring back the focus that meetings should have had all along.

I’m excited to be a part of an endeavor that may eliminate the need for business travel. That would not only save financial and environmental costs; it would improve the life quality of countless traveling consultants, experts, and business people around the world. 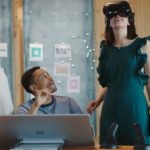 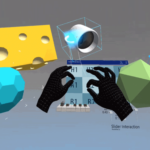 9 Augmented Reality Trends to Watch in...

The Death of the Training Department (Part...