While no official apps on the Oculus store support hand tracking yet, many developers have released demos, games or proof-of-concept applications on SideQuest that utilize the new hand tracking SDK and features.

These experiences are not fully-fledged applications or games, but just small and experimental projects that aim to show off the potential of what hand tracking applications and games might look like in the future.

If you don’t know how to use SideQuest to sideload apps check out our how-to guide.

All of the apps and games below are available through the SideQuest store.

MRTK Hands by Eric Provencher (an extension of the original Mixed Reality Toolkit by Tarukosu) is a simple environment that lets you resize, move and play around with different items. It acts as a way to demonstrate and play with all the different interaction types in the SDK. You can check out a video of us playing with the app above. This app will also let you switch to using controllers instead of hand tracking midway through the app, but you’ll have to go back to the Quest menus to switch back to hand tracking again.

The original MRTK app by Tarukosu is also available on SideQuest, which largely offers similar capabilities.

Out of all of the apps, I’ve personally found MRTK Hands to be the most reliable when it comes to the hand tracking implementation itself, but your mileage might vary.

VirtualPiano is exactly what it says – a virtual reality piano that you can play with your hands… kind of. This app definitely falls into the proof-of-concept category and is quite buggy at times. Don’t expect to be banging out some Mozart – the technology isn’t nearly good enough to be representative of an actual piano, and you can forget trying to play with more than just one finger at a time. Without haptic feedback, it is incredibly hard to simulate actually playing a piano, but it is a fun example of where we could be heading in the future.

This amusing demo is a proof-of-concept game that sees you play as a giant god that swings your hands around to kill little creatures approaching the center of the level. While the implementation is not perfect and it’s not the most stable game available, it is a cool way to get a peek into what kind of controller-free games we might see emerge in the future.

You can view footage of the game in the video embedded below, alongside Cubism.

Cubism is a short demo of a full game that is expected to launch into early access at a later point in time. It is a fun puzzle game that allows you to use your hands to fit different sized objects together to solve puzzles. It can also be played with controllers, but was recently updated to include experimental hand tracking support.

We haven’t tried this one ourselves yet, but it’s inspired by the Leap Motion Blocks demo, allowing you play with some blocks and gravity using hand tracking. If you give it a try, let us know what you think.

The SDK comes with a demo app for developers that sees you control a small train on a track, pressing buttons with your fingers to speed up or slow down the train, or have the objects in the environment makes noises. It’s a very simple demo, but might be a fun one to play around with as a starting point.

We haven’t tried this one either yet but “HyperBuild is a prototype of our “Block’ based visual scripting interface you can control and interact with using your hands!” The demo is listed as an alpha release with only a few simple math blocks included.

Those are all the apps we’ve seen available on SideQuest that implement experimental controller-free hand tracking. Have you seen anything else or want to let us know about another hand tracking app? Email us at tips@uploadvr.com

For a list of official Oculus store apps that are planning to implement hand tracking at a later date, see our list here. 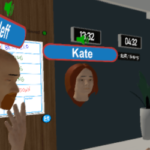 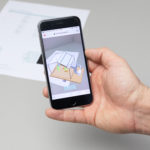