A paramedic student by day and triathlete and track cyclist by night, 28-year-old Elliot Brown began his quest for Olympic glory three years ago after discovering the sport of skeleton racing. First introduced to the Winter Olympics in 1928, the high-risk sliding sport involves a single athlete racing headfirst down a frozen track using a small “skeleton bobsled.”

Despite residing in the sunny beachside town of Sunshine Coast, Queensland, Brown is currently one of ten Australian athletes vying for a spot in the 2022 Winter Olympic Games in Beijing, China; the only problem is Australia’s lack of proper skeleton training facilities.

“A challenge of being on the coast is not having a track in Australia and not having enough facilities to train,” explained Brown during an interview with ABC News Australia. “Other countries that don’t have a skeleton track have push tracks which help you, at least, work on your start. It’d be great if we have one of those, but unfortunately, we don’t. The only other alternative is very costly as you have to travel to places like Europe to access a track.”

Desperate for an effective training solution that didn’t involve a 20-hour flight to Latvia, Brown began working with an interactive media developer based out of the University of the Sunshine Coast on the development of a VR application that could enhance his training without the need of a dedicated race track or colder climate.

“Skeleton is one of the sports that we’ve looked at with Elliot so that he can set up a video recording from a head-mounted point of view that allows him to control the sled as he’s going down the track,” said Jason Riddell, developer at USC. “And this is what we are hoping to put together fully this year, with a couple of our USC students, to create a full app for Elliot to train.”

Based on the photo, it appears as though Brown is using a VR BOX-2 head-mounted display to run Riddell’s VR mobile app. Unfortunately, there’s no footage of the in-headset experience available as of yet, though Riddel hopes to have the app fully-finished in time for the 2022 Olympics.

“Before I was doing a lot of visualization in my room on my sled, just working through the track in my head, and after a visit to the VR lab I saw that there might be an application to integrate virtual reality into my training,” added Brown. “We’ve only ever qualified one male for each of the Games we’ve had, so it would be great to try and get some Australian sliders in the top 30 to make the games for the 2022 Olympics.” 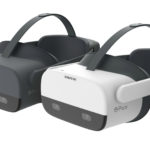 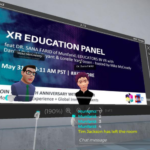