Oculus Quest includes an IPD slider on the bottom of the headset which adjusts the distance between the lenses for ideal alignment with the user’s eyes, which is important for visual comfort and clarity. Since launch however, there’s been no way to know the actual width of the IPD setting, leaving users to mostly guess if they’ve set it correctly. However, Quest actually has the capability to measure its own IPD setting, and a future software update is likely to expose this information to the user.

It’s only been a few months since the launch of Quest, but the headset has already seen a range of improvements added via software updates. Passthrough+, for instance, recently rolled out, greatly improving the headset’s passthrough view with lower latency and more accurate visuals. The headset is soon to get both hand-tracking and PC tethering capabilities too. A future update is also likely to add an IPD indicator to make it easier to set the correct distance between lenses to maximize visual fidelity and comfort.

At Oculus Connect last month during a Quest demo, I noticed that upon adjusting the IPD slider, a small pop-up appeared over my view which specified the current IPD width in millimeters. The readout updated as I moved the slider, allowing me to easily dial into my known IPD of 64mm.

A digital readout like this is common among other headsets which have hardware IPD adjustments, but it doesn’t yet exist in the consumer Quest. This week an Oculus spokesperson confirmed to Road to VR that the company is considering adding the feature, though they didn’t have any concrete information on when we might see it.

How do we know that this is likely to come via a software update rather than a hardware tweak? Looking at teardown photos of Quest shows that the headset’s IPD slider already includes the necessary electronics to measure its setting. This would make sense, as ideally the headset should be aware of the IPD setting so that it can adjust the rendered image accordingly (as an offset IPD can impact the sense of scale that comes from 3D visuals).

Why an IPD Indicator is Important

Though it’s possible to move Quest’s IPD slider, without a readout of the current setting, users are mostly left to guess if they’ve got the setting right since there’s really nothing to compare it to. Manually setting your IPD with no means of calibration is really difficult; even if you get close (say, within 5mm of your actual IPD), this can still notably effect visual fidelity and comfort.

On Quest it is possible to get a calibration screen, but it’s a clunky process and still not a particularly reliable way to get the correct IPD setting. Not having a reliable means of determining and replicating the correct setting is especially a pain when passing the headset around to others; not only is it difficult to guess where to put the setting for each user, you’ll ultimately need to dial it back in for yourself when you’re done. With a readout you could easily return the IPD to a known value.

Actually determining your own IPD measurement is still a clunky process in itself, and one that isn’t likely to get easier until eye-tracking hardware finds its way into more headsets. Short of asking for a precise measurement next time you visit the eye-doctor, you can also use a ruler and mirror to measure your own IPD, or ask a friend to hold a ruler close to your eyes and measure the distance between the center of each pupil.

In headsets of the future we could expect automatic IPD measurement and adjustment which would make this all much more seamless. 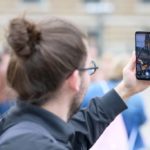 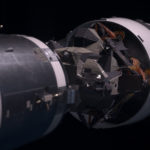