According to a study made public last year by the International Labour Organization, there were 5,147 cases of human trafficking reported in 2018 alone, 3,718 of which directly connected to sex trafficking. Unfortunately, that number is expected to rise over the next few years as the global sex trade, which has already claimed over 4 million victims, continues to grow.

In the U.S. alone there are expected to be as many as 9,000 illicit spas taking advantage of an illegal workforce comprised of 99% women. These spas and massage parlors serve as common locations for illegal sex work, often masking their activities behind a legitimate business. Often times the signs of sex trafficking can be subtle and it can be difficult for law enforcement to identify an illegal operation.

To assist police in combating this disgusting industry, student researchers at California Polytechnic State University are in development of an immersive educational solution that trains officers in identifying potential sex crimes and human trafficking activity.

Normally, law enforcement officers training for sex crimes practice using expensive physical sets designed to look like illegal massage parlors. These fake locations are littered with various bits of evidence officers can search for, such as bus passes, passports, as well as the pricing of certain “services.” Zuniga, who previously worked at California Cybersecurity Institute (CCI), came up with the concept for a VR training solution after seeing the physical mock-up utilized by the Insitute.

“We wanted a more portable way, and kinda more accessible way to bring this training to people across the state,” he said.

Along with human trafficking, Zuniga and his team claim the experience has the potential to assist other forms of law enforcement in identifying different illegal activities, including fraudulent passports and money laundering.

With Zuniga having graduated this past semester, the project now falls on the shoulders of Aquina, who will continue the efforts of the team in the hopes of eventually working alongside professional law enforcement. 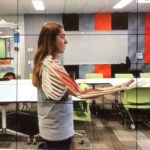 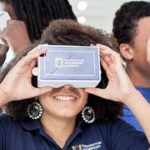 The Revolutionary Impact Of Immersive Technology On Education