The so-called Immersive Reality Training Lab lab is part of a new CSU facility called the Health Education Outreach Center, says Jordan Nelson, a member the school’s Dept. of Biomedical Sciences and one of the lab’s operators.

Nelson tells Road to VR that the lab houses 100 headsets,, in clusters of four, allowing students and instructors to simultaneously visualize complex 3D anatomical imagery in a shared virtual space. The lab and its immersive visualizations are part of a larger anatomy education program where students study in a traditional anatomy lab, explore mesh model data and diagnostic imaging in the Immersive Reality Training Lab, take assessments on iPads, and spend time studying real cadavers, he explains.

The lab is powered by 100 HP PCs with corresponding Samsung Odyssey+ headsets with retractable hooks for cable management. The headsets run ‘BananaVision’ software which was developed in-house by Chad Eitel, a research associate at CSU.

“The BananaVision software used in the immersive lab was developed specifically for our anatomy curriculum at CSU. The multiplayer software allows groups of students to collaborate around the same virtual entity at the same time, while the instructor can join any group’s virtual room from the front of the classroom (coined ‘pod hopping’),” Nelson says. “Students can dissect a virtual cadaver, create cross-sectional images and study a variety of volumized medical imaging in the immersive lab any day of the school week. We’ve worked hard to create an anatomy curriculum that is not only hands-on and exciting but is accessible and impactful.”

And while the new tech opens the door to more intuitive and engaging visualizations of complex anatomy, Nelson says the lab is designed to complement, not replace, existing teaching methods.

“The intention of this lab has never been to replace cadaver education for students, but to supplement the curriculum.”

Nelson says the lab is the brainchild of Dr. Tod Clapp, an Associate Professor in anatomy and neuroanatomy at CSU, who had the idea of developing VR software focused on anatomical visualization for student education.

The Immersive Reality Training Lab is part of the school’s new Health Education Outreach Center facility which was made possible with funding from CSU and the National Western Center COP. 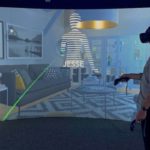 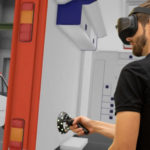