I’ve tried Antilatency a number of times and the startup’s CES 2019 demo was the best yet. The demo was like a smaller scale version of the impressive multi-user Oculus Quest “arena” setup we enjoyed so much at Oculus Connect 5. At CES, Antilatency employed Oculus Go and a small add-on to track the headset as well as gloves, a tablet and a controller. Antilatency’s tracking system uses infrared lights in the floor with the headset add-on featuring a super wide angle module to see the lights. For comparison, a much larger tracked space is below in the video of the Quest arena from OC5. Lines on most surfaces in the arena made the environment more visible to Quest’s sensors.

Antilatency is selling a kit for around $250 to track a headset up to around 5×5 meters. The integration of foam flooring with the lights is custom. Antilatency might be a lower-cost alternative to Optitrack, Vicon or SteamVR Tracking for location-based VR installations. Antilatency representatives said they are working with around 10 pilot projects. One project tracks five people with two hands each over hundreds of square meters, according to the company.

This solution could be particularly well-suited to an installation like Alien: Descent by Pure Imagination and Fox. In that experience, Gear VRs and quality floor haptics provide the sense Aliens are attacking you and a friend. The creators used OptiTrack sensors with Gear VR. The visual fidelity and easy setup of an Oculus Go combined with Antilatency tracking might make for a compelling alternative. Antilatency claims its hardware adds only 2 milliseconds of latency while taking 2,000 position measurements per second. I tried it at CES with two players and a single hand controller per player, along with a tablet tracked as well. Everything seemed extremely accurate and, yes, low latency. I can’t say how it would perform in a real world scenario though. Added latency might only be perceptible in a complex virtual world with voice chat, more players or other additions not in the CES demo.

The interlocking foam design of the flooring shown at CES felt solid underfoot for steady walking throughout the tracked space.

The ultra wide field of view “Alt” sensor sees the lights built into the flooring and plugs into the USB port on Oculus Go. The company says the system can come with different connectors for different VR headsets. Even with the lights momentarily blocked from view, the hardware appeared to track accurately. This is important in crowded multi-user setups where players can block the view of the lights in more ways. Again, though, this was a highly controlled demo with an empty virtual world. We’ll be curious to see if any of the pilot projects using Antilatency are confident enough in the quality of their systems to open publicly and start charging admission. We’ll provide updates on Antilatency and other location-based VR entertainment throughout 2019. 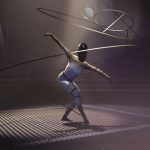 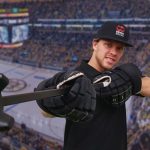