Use VR to train your brain rather than just continually shoot stuff.

2018 has been a great year for immersive technology in education. From the launch of the affordable Oculus Go headset to the transition of the Merge Cube from toy to educational tool to the plethora of ARkit and ARcore enabled experiences that launched on mobile devices, there has been a wealth of opportunities for educators around the world to begin integrating AR and VR in classrooms like never before. Whilst mobile developers seem to be focusing more squarely on AR-enabled content, there have been some stellar virtual reality experiences released for the Vive, Rift and even WMR headsets.

I actually produced a “Best of the Year” list last year (which you can find on my site www.virtualiteach.com) but I specifically focused on educational apps for the Vive. For this year’s list, I’m expanding the range to include other platforms as some excellent content has launched outside of the Steam VR Store. I will only be including apps that were actually released during 2018 though and I would highlight the fact that every app on this list was personally selected by me and this list does not represent the views of VRFocus as a whole.

Before we take a look at the Top 10 itself, I want to give honourable mentions to five apps:

Sharecare VR – This excellent app launched late in 2017 but I didn’t try it in time to include it on my list last year. Being able to stand inside a beating human heart is a breathtaking experience that literally echoes the educational future portrayed in Ready Player One.

Kolb Antartica Experience – A great idea and I love the interactivity with the penguins but it only lasts about three minutes at present. I’ll return to this in 2019 to see how it has developed.

Robotics in VR – This app lets you build a giant Lego EV3 robot then program it to move around a warehouse-sized maze. It’s still early-access but well worth a look.

Dreams of Dali – As weird as you’d expect but great for art students looking for a new perspective on the work of Salvador Dali.

1943 Berlin Blitz – Brilliant use of historical recordings to bring this moment to life in VR. It’s annoying that the app insists on the use of a gamepad controller though!

With the honourable mentions out of the way, let’s dive into the actual Top 10:

I absolutely loved the Number Hunt concept as it’s an excellent example of gamification in action. Taking the format a first-person shooter, you find yourself hurtling around a range of vibrant arenas that are populated by anthropomorphised numbers. Your aim is to make target totals before your opponents by shooting these numerical NPCs with a gun that can apply each of the four operations (add, subtract, multiply, divide). It’s great fun and a totally unique approach to practising maths.

In the popular SAMR model for technology integration on education, the highest level (Redefinition) is defined as “technology allows for the creation of new tasks, previously inconceivable.” Virtual reality seems to achieve this quite easily, especially when using an app like Nanome – one of the most exciting scientific apps to launch in 2018. Nanome allows the user to interact with an enormous range of chemicals and proteins like never before. It supersizes nanotechnology as if the student was Ant-Man and offers huge potential both in the upper levels of schools, higher education and beyond. Best of all it allows for multiple students to collaborate within the same space!

Ancient Egypt is my all-time favourite topic to teach and so I’m always eager to try new Egypt-themed VR experiences. This one really did raise the bar though. The app allows you to walk through Queen Nefertari’s tomb, guided by some first-rate narration and interaction points teach students about the history, culture and construction of the tomb. It also boasts some incredibly crisp visuals thanks to the use of super-precise digital scanning and unlike some other Egyptian tomb apps, it’s not terribly dark, which can be off-putting to younger students. It really is great to see educational content being produced with such polish and detail.

I actually had to double check the release date on this one as I was convinced it came out in 2017 (it was actually launched January 2018.) Stanford VR Lab set the benchmark when it comes to empathetic VR experiences and exploring how VR affects us as human beings and Becoming Homeless is a great example of this. It’s a short but potent experience which sees you step into the shoes of someone who can no longer afford a home. As your situation worsens, you experience the harsh realities of life on the streets first-hand. Powerful and moving, this app can easily be used as a stimulus for writing, a discussion piece in the social studies classroom or an experiment in the psychology classroom.

Produced by Sky and featuring the living legend that is Sir David Attenborough, this is unlike any other virtual museum app out there in that it focuses on interaction. This summer I took my kids to The British Museum in London and some of their favourite parts were the various stations where you could actually handle artefacts under the guidance of a resident historian who would explain the significance of each object. Hold The World offers a similar experience at London’s Natural History Museum with the unparalleled Sir Attenborough as your guide. Having selected the object you wish to learn more about, you can then focus on specific parts and dive deeper into its story. Incredible and fascinating in equal measure.

Tour Creator is a web-based tool for building interactive, multi-scene virtual tours. Whilst it’s similar to several other pre-existing platforms, it streamlined the creation process (and made it free) so that it is by far the most accessible tool for educators looking to integrate simple 360 tours across the curriculum. Completed tours can be viewed in stereoscopic mode on iOS and Android devices and it also boasts Google Poly integration for easy sharing of projects. Like many other educators, I hope that it will also integrate with the Expeditions platform in the near future. It may be the only app on the list that isn’t a 6DOF, room-scale experience but Tour Creator offers a great stepping stone for educators new to VR.

I nearly left this high definition re-release of Immersive VR Education’s landmark title of the list since the original version was a launch title for the Vive and Rift back in 2016. I changed my mind though since even those who have tried the original will find fresh awe and wonder in this stunning update that serves as a testament to how far IVRE have progressed in such a relatively short space of time. The addition of new demo modes which allow you to choose specific scenes from the full experience are also useful for educators looking to facilitate larger groups. Essential stuff.

8. Anne Frank House VR (Rift/Go/Gear)
I’m a huge proponent for using VR to allow students to travel in time and walk through history and this is a superb example of just that. Produced in association with The Anne Frank Museum, this richly detailed experience recreates the infamous Secret Annex where Anne Frank and her family lived in hiding for more than two years during the Second World War. Historically accurate and punctuated by quotes from her diary, it is a truly powerful way to engage young historians with one of the most important stories of the last century.

9. The Kremer Collection VR Museum
I love the whole concept of virtual museums and galleries allowing people without the means of visiting the real places to engage with exhibitions like never before. 2018 saw the release of the Kremer Collection VR experience which many feel raised the bar. This virtual gallery contains more than 70 classic works of Old Masters like Rembrandt rendered in stunning detail and allowing you to get closer than ever before. Each is accompanied by both text and audio, a simple but important accessibility feature that enables a broader range of ages to engage with the artwork.

I remember watching previews of this Chemistry themed app from Schell Games in 2017 and thinking it looked fantastic and it didn’t disappoint. There are several virtual lab sims out there nowadays but none offer such a student-friendly approach through the clever gameshow framing of the science. Students are challenged to complete experiments quickly but also safely to become a Champion and unlock various achievements. It’s a canny mix of entertainment and education that is often lacking in other more serious titles and it’s an incredibly engaging way to let students hone their practical science skills in a safe environment. 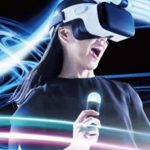 Can VR Improve Your Communication Skills? 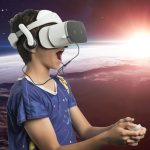