Microsoft shared a report it commissioned from Harvard Business Review several weeks ago. “The findings in the report are fascinating,” said Lorraine Bardeen, General Manager, Mixed Reality Workplace at Microsoft. “Among a great many observations, we learned that 87 percent of respondents are currently exploring, piloting, or deploying mixed reality in their company workflows. Similarly, 68 percent of respondents believe that mixed reality will play an important role in helping to achieve their companies’ strategic goals over the next 18 months.“ According to the report, most of the companies surveyed have some certitude that this new technology will help them improve training, productivity and customer satisfaction. By using mixed reality (MR) to enable remote assistance, data visualization, sales, collaboration, inspection and repairs in diverse business verticals, companies can yeild significant savings (i.e. profits) by augmenting their workforce. In a wide-ranging conversation with Bardeen I asked her to explain Microsoft’s motivation for commissioning the report, “Mixed Reality, A New Dimension of Work”, and sharing it with the public. “We thought the best way to help awareness of the business value of mixed reality was for everyone to hear the genuine voice of the customer collected by a respected, objective organization like Harward Busines Review.” The report can be downloaded for free here.

“We’ve been working with customers for three years now. They face a wide array of challenges in different industries, products, places, and workers,” Bardeen said, “but they are all transitioning to an MR-enabled hands-free workplace. By understanding how they are similar and different, we can craft out of the box applications, so they don’t have to make software.” Sort of like Microsoft office, I offered. Bardeen says it’s more like the Surface Pro strategy. The company made a big investment in first-party software to show off the capabilities of this new type of computing. “We felt we need to show integrated, end-to-end solutions to partners and customers to excite the industry and other OEMs and companies to innovate themselves,” said Bardeen. “This is what’s happening with HoloLens.” One of the key opportunities identified by the survey concerns what Microsoft calls “Firstline Workers”, who makeup 80 percent of the workforce but often have limited access to relevant, contextual information due to the on-the-field or on-the-floor nature of their jobs. These workers are typically on the front lines of any business workflow: behind the counters, in the clinics, traveling between customers for field service, or on the factory floor. “Several of Microsoft’s commercial customers are already empowering their Firstline Workers with mixed-reality solutions that enable remote assistance, spatial planning, environmentally contextual data, and much more,” Bardeen told me. With the HoloLens Firstline Workers workers conduct their usual, day-to-day activities with the added benefit of a heads-up, hands-free, display that gives them immediate access to valuable, contextual information. Microsoft says speech services like Cortana will be critical to control along with gesture, according to the unique needs of each situation.

“One of the things we think is most exciting is that Mixed Reality has been a breakthrough for workers themselves. There’s been a surprising amount of grassroots engagement with mixed reality workflows very early on. Workers quickly realize the power of first-person point-of-view computing, and real emotional engagement goes way up. Fresh ideas are allowed to bubble up. Workers think in 3D. They are spatial arrangement workers, as a result, their work experience, their moments of decision making, are not so easy for them to explain. The shared views the HoloLens enables has empowered workers and made them active participants in the digital workplace.” It’s a great example of technology making something we are already doing better. Every worker wants their work to be impactful, to feel like they are contributing to an enterprise larger than themselves in a meaningful way.

In order to fuel further interest from developers and businesses Microsoft is sharing use case videos, blog posts, and making presentations conferences like AWE and PTC’s Liveworx Conference, where the company is able to demonstrable value across a wide range of workplace scenarios using their first party Microsoft Remote Assist and Microsoft Layout.

HoloLens inventor thought leader, and senior Microsoft executive Alex Kipman spoke about mixed reality in the modern workplace at LiveWorx18 in Boston last month. He hit on Microsoft’s strategy for MR, in particular how it will serve to accelerate MS plans for an Intelligent Cloud and an Intelligent Edge. His fireside chat with Jon Fortt is a must-watch.

The video includes a use case, BAE Using PTC’s Thingworx Studio software with the HoloLens. BAE created a guided step-by-step training solution to teach workers how to assemble a green energy bus battery. Using these tools, BAE can now create these guides for Firstline workers in just hours at a tenth of the cost, training new people 30-40% more efficiently.

I asked Bardeen what Microsoft hopes we will take away from the report, blog posts, and executive appearances like Kipman’s, and her own presentation at AWE last month. “Companies are looking for ways to apply this technology,” said Bardeen. “They’re increasingly aware of its ability to help streamline and promote innovation within an enterprise, but it’s not so easy to take the first step, so we’ve provided a simple checklist, a playbook, with discrete steps.” These are (1) Education; (2) Think big start small. Don’t rip apart business processes. Replace those surgically; Once MR is in the process, doing one thing really well, all the ideas and creativity that’s been locked up is unleashed; (3) Understand new worker roles. For the first time anonymous Firstline Workers have digital identities; and, (4) Choose the right tool for the job. Select Microsoft stores throughout the US are demoing the HoloLens by appointment. Find your closest location here.

Charlie Fink is an AR/VR consultant, columnist, speaker, and author. As a 27-year-old junior executive at Disney, Fink created „The Lion King“. For this sin, he was promoted to VP of Story Development for feature animation. In the 90s he oversaw the expansion of Virtual Worl…

Remote assistants on the Microsoft HoloLens.Microsoft

Graph from a study on the Importance of MR.Harvard Business Review

Mixed Reality has the potential to make every aspect of the business process better, faster, and cheaper.Microsoft

Microsoft Layout allows space designers to preview the placement of new equipment on the factory floor.Microsoft 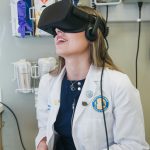 Training The Next Gen Of Doctors And Nurses 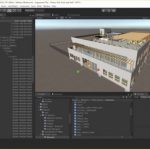