– On Thursday, virtual reality company HTC VIVE announced its new headset called the Vive Focus, which is aimed at enterprises.

– Although VR has previously mostly been used for gaming, it is quickly growing for enterprise use.

– It can be used for business collaboration, training and education, such as teaching medical students about sleep apnea, showing car designers how to fix and prototype a car, and conducting remote meetings in a 3D virtual space.

As I put on a bulky white headset and adjusted it to fit my head, I found myself in a hospital room. One doctor leaned over a sleeping patient who had an air pumping device on his nose, while another was preparing tools. I felt like I was on an episode of „Grey’s Anatomy.“

Suddenly, a floating robot head appeared, explaining that we would be learning how to identify and treat sleep apnea. It guided me towards the patient’s nose, and before I knew it, I had jumped inside his nostril!

This was a simulation from SimforHealth, a French company that creates virtual reality simulations for medical students and pharmaceutical corporations. This simulation is supposed to teach medical students about sleep apnea, guiding students inside a virtual nose to show what happens to patients when they sleep. On this simulation, the inside of a nose looked like a pulsing red cave, with long, thin spikes coming out of the walls — nose hairs, I assume.

Although virtual reality is typically associated with consumers, such as for video gaming, the technology is increasingly being adopted for use in professional settings. VR and augmented reality are projected to grow to $162 billion by 2020, and more products are targeting enterprise use.

On Thursday, the VR company HTC VIVE announced its Vive Focus, an all-in-oneheadset that includes storage, built-in speakers and more. It’s targeted at businesses and can used for education and training simulation, including at NASA and hospitals.

What makes this hardware significant is that it’s much simpler and more portable for customers to use, says Dan O’Brien, General Manager of the Americas at HTC VIVE. Other VR headsets that only developers may use might involve expensive hardware and require users to stay in one place.

The possibilities for this are endless, O’Brien says. This could be used for surgical and medical training, like when medical students might work together to perform a virtual surgery. This could even be used for automotive design, where employees can prototype and design cars in VR, or even learn to fix cars. Innoactive, a German VR enterprise software company, had partnered with Volkswagen to create a training scenario for workers to learn to put together a car in a factory.

„Executives are understanding they can save time and money,“ O’Brien said. „Their designers don’t all have to fly to Germany to meet in one room and talk about design. They can go to VR design room and talk collaboratively there.“

VR can also be used to collaborate on code. Primitive, which creates software development visualizations, created an app to review code. When I tried out this simulation, I was transported to a dark space with floating lines of code connected by a laser web — a scene almost straight out of „The Matrix.“

It showed me how different files of code were linked, and with my laser pointer, I could pull up an entire floating page of code in front of my eyes. With this application, developers can work together to review code, circle the parts they want to highlight and dig through open source projects.

„It was quite fascinating because I was not a software coder myself,“ O’Brien said. „It’s also about efficiency. When I sat in and watched 5 developers get in the space together, they were having intense conversations about the code.“

In addition, VIVE had also launched its own workforce collaboration tool built specifically for enterprise called the VIVE Sync. This can be used to help employees collaborate with each other in a virtual space, especially when they work remotely. Each employee’s avatar can share ideas, show presentations, import images, show videos and more all in a 3D virtual space.

In the coming months, Vive plans to launch developer kits to add to the headset so developers can create their own applications for VR. Although the buzz around VR has died down, O’Brien believes there will be tremendous growth for VR in the enterprise space.

„We see it growing at a really rapid rate,“ O’Brien said. „We have seen consumer VR grow at a healthy rate. Now enterprise is growing faster than consumer.“ 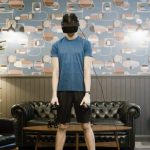 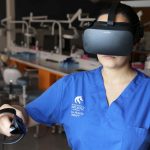 Oral health students test their nerve in the virtual world