The Media and Entertainment Metaverse: What to Expect

How will the rise of the Metaverse shift the way audiences socialise and enjoy immersive content?

The media and entertainment metaverse, complete with 3D avatars, is no longer a distant prospect. Today’s companies now build immersive tech solutions at scale to facilitate the future of XR socialising.

In the wake of the COVID-19 pandemic, companies are set to reshape the industry with high-tech creativity and ingenuity. These experiences will no longer function like webinars or VR apps, but will converge virtual spaces with interoperable, engaging content. Concerts, tech shows, events, and showrooms will invariably change with the Metaverse.

A Closer Look at Metaverse Entertainment

In the future, users will access the Metaverse, a unified space integrating multiple virtual worlds on an interoperable platform. People can connect to the future spatial communications platform with a single framework and protocol similar to Web 2.0.

Regarding technologies, the Metaverse will incorporate artificial intelligence (AI), virtual, augmented, and mixed reality (VR/AR/MR), the internet of things (IoT), and hand and eye tracking tools.

In the entertainment industry, the Metaverse has and continues to connect audiences in shared virtual spaces via headsets and their respective or third-party virtual spaces. Meta Platforms, Spatial, STYLY, Pico, Lenovo, Varjo, and other firms are already building platforms to facilitate this.

No longer bound to physical locations, users can access volumetric video and real-time 3D content to interact. Creative visionaries are now using the canvas of spatial computing for their experiences.

Important Use Cases for the Media Metaverse

As media and entertainment companies explore possibilities inside the metaverse, there are three key use cases to remember.

Virtual concerts have gained traction over the last few years, namely due to COVID-19, but have shown promising feedback and results. Multiple metaverse platforms, including Meta’s Horizon Worlds, Decentraland, The Sandbox, Monkey Kingdom, and others have recently hosted huge concerts.

One of the strongest verticals for entertainment and media metaverses is gaming. Arguably more lucrative than the movie industry, gaming has remained a massive market for content creators. Solutions developed for the gaming industry have also led to the creation of serious gaming technologies.

Companies like Microsoft, Meta Platforms, Epic Games, Unity, and others are facilitating the rise of serious gaming technologies. Now, new and veteran firms can leverage technologies developed by predecessors to expand on future metaverse experiences.

With the rise of VR gaming, Meta Quest rivals like Valve Index and Pico are now competing in the industry.

Additionally, companies like Improbable are scaling up the number of concurrent gamers with massive multiplayer technologies. These leverage cloud computing, edge server processing, and AI-backed enhancements to deliver industry-leading gaming solutions to audiences.

Developers are tapping media psychology to develop next-generational immersive experiences to deepen their emotional impact on audiences. On the other hand, Technologies such as avatar development will create added realism for gaming interactions with face tracking.

Additionally, motion capture (mocap) systems from Sony and Vicon will deepen realism for content creators developing characters. This aims to democratise content creation for bespoke studios and small to medium enterprises at a fraction of the cost of Hollywood studios.

Making Inroads in the Media Metaverse

Several companies are currently investing heavily in XR entertainment and the Metaverse.

Disney has upscaled its metaverse and XR patents to bring immersive experiences to its theme parks. It also aims to add AR-powered immersive content to movies broadcast on Disney+ and other platforms.

Meta has debuted several visions for the Metaverse at its 2021 and 2022 Connect events. Company CEO Mark Zuckerberg outlined a metaverse that would allow users to design and play games, attend concerts, socialise, and other scenarios.

Meta’s Horizon platform has triggered rivalry with Pico Interactive and others entering the XR market.

Epic Games’ Fortnite recently announced $1 billion in funding to build the metaverse infrastructure for creatives. It has built immense gaming experiences for sportswear brands such as Timberland, Unilever’s AXE deodorant, and Wendy’s.

Furthermore, global telecoms such as Verizon, China Mobile, T-Mobile, and EE have begun scaling up their networks. This aims to offer massive immersive experiences for US football and basketball games.

Verizon’s 5G networks powered an AR smartphone experience for the Carolina Panthers in Charlotte, NC. Thousands of people attending the match were captivated by the AR mascot’s prowl on the stadium. 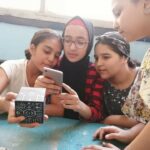 Top 10 things that happened to Merge this year 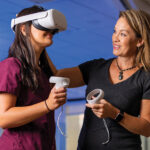