Lenovo today unveiled its next standalone VR headset for enterprise, the ThinkReality VRX standalone. While the company may be pitching its latest headset for businesses, it seems VR hardware is starting to reach a pretty solid consensus on what’s next. The near future of VR is slimmer, lighter, and has a dash of augmented reality for good measure.

Lenovo’s headset features some specs that are quickly becoming commonplace in the upcoming generation, namely a slim and light design thanks to the inclusion of pancake lenses, and color passthrough cameras for AR interactions. Anyway, here’s a quick primer on pancake lenses for a deeper look at all the hubbub:

While slimming down VR headsets has always been a priority—pancake lenses are significantly slimmer than traditional Fresnel lenses in devices like Quest 2—it’s the color passthrough function that effectively combines AR and VR into a single device (aka ‘mixed reality’).

And Lenovo is in good company too; Meta is getting ready to launch Project Cambria, which earlier this month was revealed to be the long-awaited Quest Pro in a leak, and ByteDance’s Pico Interactive recently unveiled Pico 4, which aims to take on Quest 2 in Europe and some regions in Asia.

And what’s all it for? Lenovo is pitching the headset as “the VR solution for workers everywhere,” adding that its headset is focused on improving employee training, virtual collaboration, and tasks like design and engineering in 3D.

“Our customers are looking for reliable, flexible and scalable gateways into the growing Enterprise Metaverse. They need business-class solutions for the new realities of working in hybrid scenarios and virtual environments” said Vishal Shah, GM of XR and Metaverse, Lenovo. “We engineered the Lenovo ThinkReality VRX to be the VR solution of choice for training and collaborating in immersive 3D.”

Lenovo is making ThinkReality VRX available in early access to select partners by the end of 2022, and will later launch general availability in select markets sometime in early 2023.

The company is also known for a number of VR and AR headsets since it began in 2016 with the launch of a Windows Mixed Reality headset, which was released alongside other top OEMs, such as HP, Samsung, Dell, and Acer. The company released the Mirage Solo VR standalone, manufactured the Rift S for Meta (then Oculus), a Lenovo Classroom 2 VR headset built in partnership with Pico, and its most recent, the ThinkReality A3 AR glasses for enterprise.

What are pancake optics? It’s not quite what it sounds like, but once you understand it, you’d be hard pressed to come up with a better name.

While the simple lenses in today’s VR headsets must be a certain distance from the display in order to focus the light into your eye, the concept of pancake optics proposes ‘folding’ that distance over on itself, such that the light still traverses the same distance necessary for focusing, but its path is folded into a more compact area.

You can think of it like a piece of paper with an arbitrary length. When you fold the paper in half, the paper itself is still just as long as when you started, but its length occupies less space because you folded it over on itself.

But how the hell do you do that with light? Polarization is the key.

It turns out that beams of light have an ‘orientation’ which is referred to as polarization. Normally the orientation of light beams are random, but you can use a polarizer to only let light of a specific orientation pass through. You can think of a polarizer like the coin-slot on a vending machine: it will only accept coins in one orientation.

Using polarization, it’s possible to bounce light back and forth multiple times along an optical path before eventually letting it out and into the wearer’s eye. This approach, known as pancake or folded optics, allows the lens and the display to move much closer together, resulting in a more compact headset. 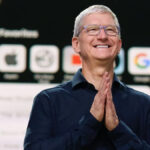 Tim Cook says AR & VR will be revolutionary, but the public will need education 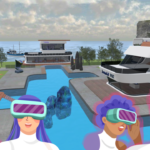