Top News
Microsoft HoloLens said to reduce training time by...
Effectively upskilling and training employees that work with...
Why Using VR for Training in the Renewables...
What Is a Digital Twin?
Virtual reality—The Future of Flight Training
XR Success in Vocational Training: The Conservatoire National...
VR For Education: How The World Already Changes...
Cooking Simulator VR Coming To Quest 2 On...
Siemens Healthineers adds VR training for mobile 3D...
VReps Uses Virtual Reality as a Basketball Training...
Home Knowledge Avoiding a muting of minds: why 3D workspaces are better for creativity than video calls
KnowledgeResearch

Avoiding a muting of minds: why 3D workspaces are better for creativity than video calls

As remote work becomes the norm, video calls or meetings are undoubtedly a useful and cost-effective way to stay connected with colleagues. But they can be mentally and physically draining. Moreover, we’ve long suspected that video conferences perform poorly as forums for generating new ideas.

The reason for this, the researchers say, stems from a fundamental difference in the physical nature of the two environments, namely that video callers reduce “their visual scope to the shared environment of a screen,” which in turn “prompts narrower cognitive focus.”

Creative brainstorming and ideation clearly require a high level of engagement and focus. But is gathering with others in the same physical space a must to spark creativity? What if the shared space is a virtual 3D workspace where the visual range isn’t limited to a computer screen?

3D workspaces, like those offered by Glue, are designed to remove barriers to communication, collaboration and creativity. They work by recreating the sensation of being in a meeting room or larger venue face to face with others, even if participants are thousands of miles apart.

Typically, these spaces are accessed using a VR headset, which enables people to freely move around and interact with in-room meeting tools just like in a real office. A well designed VR experience is one where you feel truly immersed in the environment. For this, various spatial, visual and auditory elements must work seamlessly together.

2. Expressive avatars help you stay in the zone

Avatars, in particular, play a key role in making our interactions in VR feel like those in the real world. Glue has developed its avatars to be highly expressive, using AI-based facial animation and lips syncing technology to closely mimic people’s behavior and features.

The result is that conversations feel natural. And because you’re represented by an avatar, you no longer face the pressure of being in front of the camera. Research shows that people get distracted and dissatisfied by seeing their own faces during video calls, which is hardly conducive to creativity.

3. A synchrony of sight and sound

The researchers in the Nature study suggest turning off your camera. Yet this doesn’t fix the problem of people talking over the top of each other, especially in meetings of four people or more.

In VR, people receive lots of verbal and non-verbal cues to know when it might be their turn to speak. Good sound design plays an important role too. Glue uses proprietary spatial audio technology to mimic how sounds and voices would sound in any given space, generating a level of realism that reduces distraction and helps people stay focused on their discussion.

There’s also a stronger level of visual synchrony between participants than in video calls due to the feeling of being in one space. Participants synchronize their movements with others in time – for example, two people “engrossed in conversation may lean back in their seats at similar times.”

As working from home has increased, the challenges and limitations around video calls have become clearer. Fortunately, 3D workspaces provide a shared setting that can match their physical counterparts for invention, imagination and creativity. 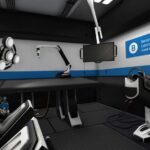 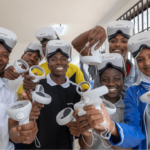