The AirRes Mask can be used to simulate a variety of stressful and high-risk scenarios.

A research team working out of the Salzburg University of Applied Sciences in Austria has developed a unique accessory for the Meta Quest 2 VR headset that allows users to interact with the virtual world by simply breathing. The bizarre-looking peripheral can also be used to hinder the user’s breathing in order to simulate “adverse” environmental conditions, such as smoke caused by fire.

The AirRes Mask, as it’s referred to by the team, is composed of a standard half-face respirator equipped with a sensor and resistance disk. The device works by measuring the user’s breathing, allowing them to engage with the virtual world in a variety of unique ways.

In a video provided by the team, we catch a glimpse of the device being used to play the harmonica. Depending on the position of the virtual instrument and the force of the breathing, the user is able to trigger different notes. Later on, we see the user operating a virtual blowgun and blowing up balloons by carefully breathing into the apparatus.

As previously mentioned, the AirRes Mask can also be used to simulate breathing resistance in VR, allowing developers to safely immerse user’s in a variety of harsh environments. This is demonstrated with a firefighter simulator in which the user battles a raging inferno from within a confined space.

As the smoke begins to fill the room, the resistance disk restricts airflow through the mask to simulate smoke inhalation and a decrease in stamina. According to the research team, hindering a user’s breathing can increase their stress levels, further immersing the user in a variety of high-risk scenarios.

“Breathing resistance can provide feedback for simple actions such as blowing into wind instruments, or for more complex contextual information about environmental conditions or the state of the user’s virtual avatar,” said the research team in their full research paper.

We’ve seen our fair share of bizarre multi-sensory technology in the past, from a haptic feedback device that utilizes ultrasonic transducers to simulate the feeling of spiders crawling on your face to a location-based experience that lets you smell the inside of a tree. The AirRes Mask offers yet another way for developers to immerse VR users in their experiences via multi-sensory technology.

In addition to entertainment, the device could prove immensely useful for training purposes. The technology offers companies and organizations a way to efficiently simulate stressful and even potentially dangerous scenarios without risk to the trainee. 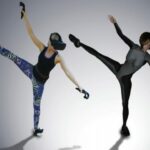 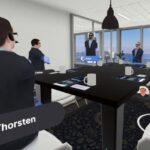