They save time, simplify processes, make it easier to collaborate and increase efficiency: Virtual reality tools are gaining importance at Volkswagen. Three examples from three areas – from technical development, through assembly planning, to factory logistics.

Take hold of the steering wheel, engage level D, release the brakes, set off. A road in Wolfsburg, houses, trees, nothing out of the ordinary. Sound boring? It isn’t. The driver is on the move in virtual reality. He is sitting in a driving simulator in Volkswagen’s technical development area and sees the driving environment through VR glasses. During the virtual journey he checks a lot of aspects that are important for using the control elements and for the overall customer experience. Is the (real) tug when the seatbelt tightens irritating? How easy is it to activate various vehicle functions? Is the display intuitive to use?
Volkswagen’s Virtual Reality Center of Excellence (VRK) is responsible for the virtual journey – it is tasked with allowing new vehicle concepts to be experienced at a very early stage. This accelerates development and conserves resources.

High-tech tool: The proportions are exact

The physical design of the dynamic simulator is a simple cockpit model. There aren’t any doors or a passenger seat, the dashboard has a flat surface and a mount for dummy displays. Electric actuators allow the driver’s seat, steering wheel and pedals to be configured to have exactly the same proportions as the future car model, be it a city car or a light commercial vehicle. Things get exciting when developers put on the VR glasses – these allow them to see the display and control elements, such as displays and mirrors, virtually. A camera system tracks hand movements and transfers them to the VR scene.
“We get the raw data for the interior from various technical development areas,” explains Florian Kerzel, Group IT development manager. “It is formatted for our needs, visualised by a game engine and transferred to VR.” Sandro Hagemann, who coordinates the further development of the visualisation software, adds: “All the pieces fit together perfectly. In VR we work with almost the same level of precision as in the real world.”

During the virtual tour of the city, the impressions of the ergonomics simulator make the driving experience realistic. “The longitudinal and lateral acceleration is generated by an electromechanical hexapod,” explains Timo Schimmel, who is responsible for simulating the driving experience. “This is the platform to which the variable cockpit is attached and that simulates the movements of the chassis in all directions.”

Evaluating ergonomics in a driving simulator is challenging – but by definition it cannot be 100% perfect and suitable for everyone. “Our customers are totally different. What a young woman wants from the seats and controls is very different from what an older man wants,” says Bert Hartfiel, VR system developer in the driving simulation team. “Our design aims to find the optimum compromise. The driving simulator is a great help in achieving this.”

Evaluating colours and features: VR in the static seat box

The VRK’s tasks also include the Digital Customer Check (DCC) – an important decision-making meeting during which developers evaluate the interior of a new model from the perspective of future customers. Çağdaş Tekcan, VR system developer at the VRK, explains: “Here, we use a static seat box that, just like the driving simulator, accurately reproduces all of the interior dimensions of the new model. During the DCC, virtual reality helps developers evaluate the impression subjectively. For this, we can import a variety of colour concepts or whole option packages into the VR glasses at any time. We can even show the interior of the predecessor model or another reference vehicle if required.”

VR applications throughout the Volkswagen Group

Applications like the driving simulator and Volkswagen’s VR seat box are of great benefit to the company. Particularly in the early stage of vehicle development, they make it unnecessary to build lots of physical prototypes. In general, the VR tools reduce expenditure on materials and business trips, and thereby do their bit towards meeting sustainability targets. They also simplify coordination and evaluation processes. In a nutshell: They save a lot of time and money.

The same also applies to other virtual tools that Volkswagen uses. The Digital.Realities:Hub – a cloud-based platform that connects VR and AR applications, as well as users – is made up of around 150 VR tools. The platform also bundles a large number of relevant services required for AR and VR applications. These include services for automated data formatting and data pipelines, asset and user management, as well as digital collaboration. The Digital.Realities:Hub incorporates almost all of the Volkswagen Group brands, companies and global locations; around 3,300 VR sessions are held each year. This variety shows just how much progress has already been made when it comes to the use of digital development tools.

Virtual assembly planning instead of plywood and cardboard

One example of how VR is used in production are the 3P workshops (Production Preparation Process). They are held when an assembly line needs to be set up or modified at one of the many Group locations. During the workshop, representatives from plant planning, logistics, assembly, the pilot production centre and quality assurance then identify how the individual cycles need to be set up – down to the last detail: Is the material trolley in exactly the right place? Are the employee’s routes as efficient as possible? And are all motion sequences acceptable ergonomically?
Traditionally, these stations were built using plywood, cardboard and dummy elements, as Dennis Abmeier, Business Partner Manager Digital Realities Group IT, points out. “And a prototype that had already been dismantled to suit requirements was used as the car. But prototypes are very expensive, which is why we moved the workshops to the world of VR – to virtual meetings, virtual cycles and virtual cars. A digital image of the production facilities is used as the data basis. The digital images of the individual assembly cycles were exported to a game engine and visualised using 3D glasses.”

Abmeier reports on the workflow: “Most participants meet in the plant training centres and in rooms with similar facilities. They wear controllers and data gloves, the tracking system in the room transfers their movements to the simulation, where they act as avatars (which are characters represented as an image). Each participant can configure the size of their avatar. This shows us whether a 6-foot man will hit his head on the lid of the boot, or a 5-foot-2 woman will have to stretch. Every participant wears a display on their wrist, which shows them their process steps. The time each step takes is recorded.”
Audi is another pioneer of VR technology. “The e-tron GT was the first Audi model not to have a physical prototype in the 3P workshops,” says Abmeier. “In the world of VR, we analyse assembly processes holistically, which allows us to detect errors earlier than before and reduce the workshop cascade.”
After the e-tron GT pilot project, VR technology moved on – to the Audi plant in Mexico and Volkswagen Commercial Vehicles in Hannover. The software and methodologies are refined after every use. The virtual workshops are suited not only to assembly, but also the pressing plant, bodymaking, the paint shop and logistics – at all locations around the world.

Volkswagen is relying increasingly on virtual reality when it comes to introducing new logistics processes as well: Static representations and theoretical text documents that describe the processes are replaced by VR applications. The company is aiming to further increase efficiency and accelerate its digital transformation.

An example of this are the VR workshops, which are about modifying workflows in logistics for a new IT system and its software. For the employees who need to master thousands of processes in the global plants, the changes involve lots of new features: What does the label look like that has to be scanned? What needs to be done if something is wrong with the inventory? In VR workshops with planners and IT specialists, the logistics experts can discuss processes early on, share their specialist knowledge and actively shape the processes.

Malte Hedemann, Lead Group Collaboration:Hub, talks about the strengths of VR: “Previously, colleagues spent hours sat around a table. The end result was numerous texts and diagrams. Now, our VR tools allow us to represent the processes in such a way that anyone can run through them virtually and understand them straight away.”

The simulations that Hedemann and his colleagues use map an abstract reality. They enable the employees who navigate it with data glasses and gloves to learn about and test the digital systems and tools.

“In the simulation, both the analysis of vulnerabilities and change management are very fast and focussed,” explains Hedemann. “Another strength of the VR applications is that we can use them in every project phase – when planning a process, when modifying it to suit the specific conditions of the plant, when training employees and during routine operation.”

The VR applications are still in the trial stage; they are expected to be introduced at the Emden site first, before being introduced at other locations in rapid succession: The VR technology will also be rolled out to plants outside of Europe. 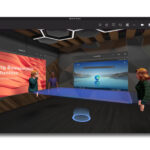 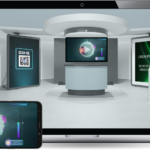