This mixed reality stargazing experience for Quest opens the windows into outer space.

When Facebook—now Meta—introduced its Passthrough API Experimental earlier this year, it opened the doors for developers, allowing them to harness the power of the Quest’s Passthrough+ technology to create immersive mixed reality experiences that blend the real world with the virtual.

This includes Stargazing, a mind-blowing mixed reality experience that places retractable walls in different parts of your real-world space that slide open via simple voice commands, allowing you to gaze into the cosmos and explore different star systems from the comfort of your home.

Created by XR developer Emanuel Tomozei as a submission for the Facebook XR Hackathon, Tomozei’s app shows how Passthrough API Experimental and mixed reality could potentially be used as an educational or meditative tool, and how hand gesture and voice commands could play a larger role in the users’ experience.

In the video, which is one of the submission requirements for the Hackathon, Tomozei is seen raising his hand to activate the listening menu. Upon speaking the words “open roof” the ceiling of his home “retracts”, exposing the constellations above. He then moves to the closest window in his home and says “open window”, at which point a select portion of the wall slides down just in time to see several shooting stars fly past.

Along the wall, a virtual panel displays various information, from the time and date to the exact time the moon will set in Tomozei’s time zone. When he walks over to his doorway, Tomozei can see a massive galaxy floating nearby. He can even lean out of the doorway for a better view.

But it’s not just visuals. At a certain point in the video, Tomozei raises his hand and says “play music”, at which point a soothing stargazing soundtrack begins to echo gently through the room into the room.

In order to bring this jaw-dropping mixed reality experience to life, Tomozei created a “celestial sphere” by generating a database of over 7,000 stars complete with their real-world positions and magnitudes. He also generated constellations and labels, so when you look up into the sky, you’ll know exactly what you are looking at. You can get a better idea of how Tomozei built his stargazing experience in his Hackathon video here at the 1:13 mark.

At the moment, the experience doesn’t adjust to your real-world location or the time of the day, though Tomozei does hope to introduce this feature as part of a future update in addition to additional educational elements.

The app does feature a brief setup process that will require you to layer virtual walls and windows over your real-world environment. This is done in-headset using Passthrough mode. Once you’ve identified these “portals,” you’re ready to begin exploring the cosmos.

The Facebook XR Hackathon, which runs online from November 9 – 22, had Tomozei and other participants coming together to compete in three team-based product challenges: Group AR Effects, Hand and Body Tracking Performance AR Effects, and Voice and Hand VR Experiences.

In a Reddit thread, Tomozei said that any money won as part of the competition will go towards the development of his stargazing prototype. He also expressed interest in working on an app for Facebook’s higher-end Cambria XR headset, which will be available sometime next year.

You can learn more about Emanuel Tomozei and his Stargazing AR passthrough prototype here. This includes links to his Github, LinkedIn, Twitter, and personal portfolio.

To learn more about Facebook’s XR Hackathon or to register, click here. 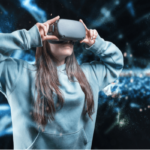 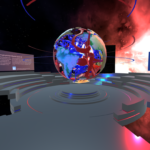