The Information, Bloomberg and analyst Ming-Chi Kuo all claim Apple will release a sleek AR-VR headset as early as 2022 with high resolution color cameras. Kuo claims it will be priced around $1000.

In February The Information claimed to have viewed images of a late-stage prototype “which show a sleek, curved visor attached to the face by a mesh material and swappable headbands”. The outlet drew an impression:

While reports to date suggested the device will be fully standalone, this new report claims it will need to be wirelessly tethered – “presumably” to an iPhone, iPad, or Mac – for “the most advanced features.” The report says the presence of an onboard graphics processing unit “suggests” there is also a standalone mode, but no details were given as to its capability. Apparently the headset’s custom chip is less powerful than the A-series used in iPhones & iPads, and lacks the ‘Neural Engine’ machine learning accelerator. If the chip really is notably less powerful than an iPhone, standalone content may be very limited. Instead, the report claims, the chip has unique wireless transmission and compression capabilities suitable for wireless VR. The chip is “at least a year away” from mass production, the report claims.

It’s unclear exactly how this would work. Potentially the camera imagery could be processed onboard to ensure consistency & low latency, while the host device renders graphical content. This could enable a much smaller battery and thus a lighter headset. Analyst Ming-Chi Kuo previously claimed the product will weigh somewhere between 100 and 300 grams, around half Facebook’s Oculus Quest 2. Quest 2, of course, can also wirelessly connect to a host device – a Windows PC with a graphics card.

A separate The Information source claims the Apple headset’s image sensors are “unusually large” to capture high resolution image data. Apparently TSMC “has struggled to produce the chip without defects and has faced low yields during trial production”.

Given the timeline of mass production and issues with the sensors, it’s unknown whether the headset is still slated for a 2022 launch. 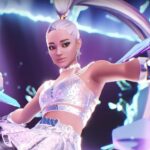 Touring The Musical Metaverse: Virtual Concerts are Here to Stay