How To Watch Disney+, Prime Video & Netflix On Oculus Quest 2

Interested in watching streaming services like Disney+, Netflix and more on Oculus Quest? Here’s our guide to what’s available and the best way to do it.

We also have a whole guide on how to watch TV shows and movies on Oculus Quest — that guide is more focused on all the different services and apps, not just streaming services, that let you watch movies and TV shows, both paid and free, using apps like Bigscreen and YouTube VR. Check that for other options if you’ve had you streaming services fill and are looking for something different to watch.

There are two ways to use streaming services on Oculus Quest. For some streaming services like Netflix, a native app is available — this means you can download a Netflix app from the Oculus Store and watch Netflix in a log cabin environment in VR in the same way as you launch a game when you want to play it.

For some services, it’s possible to use Oculus Browser to log in and stream content through a browser window, just like a PC. This is useful for apps that don’t yet have native Quest apps, such as Disney+. You can even go full screen, to block everything else out of view if you want.

The other advantage of using Oculus Browser is that you can use the Passthrough home environment — allowing you to watch something in a browser window while keeping an eye on your surroundings with the Passthrough view. You can also open multiple tabs, so you could work on something else or browse the internet while watching.

However, not everything works with Oculus Browser — we’ve had mixed results when testing streaming services through it.

Netflix is one of the most popular streaming services in the world. Luckily, it also has a native app for Oculus Quest.

The Netflix app is available to download for free on the Oculus Store, and places you in a small, cozy cabin with a large screen (pictured above) that lets you browse and play Netflix content from your region. However, unlike Bigscreen, there’s no way to use the Netflix app to watch with friends or in any kind of social capacity. Plus, the video stream is capped at 480p according to Netflix, so visually the movies won’t not look super crisp.

Unfortunately, Netflix does not work on Oculus Browser, so the native app is your only option.

Disney+ has not yet launched a native app for any VR headset, let alone the Oculus Quest. As far as we know, there’s been no indication of plans to launch a VR app either.

However, Disney+  does work with Oculus Browser, as pictured above — just open up a new tab and log in to Disney+ like you would on a computer. Everything should go smoothly and you’ll be streaming shows in no time.

Amazon Prime Video does have a native app for Oculus Quest headsets. Access to Prime Video is included with Amazon Prime, so just login to your Amazon account and you’re good to go. You can play movies and TV shows included with Prime, and watch them in a virtual movie theatre. There’s also a small selection of VR movie content as well.

Prime Video also works in Oculus Browser, but with the restriction of only streaming in standard definition. If you want to watch Prime Video while in Passthrough mode or with other tabs open, then this should work great.

Hulu, Peacock and other streaming services

Other popular streaming services like Hulu and Peacock don’t currently offer native Quest apps. We haven’t been able to try all services in Oculus Browser, but you can log in to any streaming service yourself and see if it works — so far, we’ve found Netflix to be the only one that doesn’t. 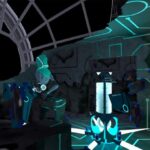 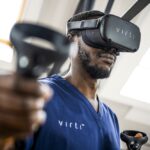