Visitors can hunt for augmented reality creatures featured in the all-new 4D film.

Everyone’s favorite chain of LEGO-themed amusement parks, LEGOLAND, has revealed plans for an upcoming 4D film experience complete with its own AR-powered scavenger hunt that will have visitors combing real-world locations in search of virtual creatures.

Debuting this summer at the LEGOLAND Florida Resort, the all-new 4D movie, Lego Mythica – Journey to Mythica, will have attendees joining the magical Alicorn Bobs as he embarks on an imaginative journey to discover his true powers. Along the way, audiences will “escape the Chimera, soar with Maximus the Sky Lion, and make a splash with Duo the Hydra.”

The term “4D” is often used to describe entertainment systems that utilize 3D visuals in combination with various sensory effects—such as wind, heat, and smells—to further immerse users in an experience. While information regarding the 4D film is scarce at the moment, an official press release states that attendees will experience “enchanted forests, raging seas, hidden caves, fire, and ice.”

In addition to the new film, LEGOLAND will be launching an AR scavenger hunt based on the LEGO Mythica universe. Using the free LEGOLAND Florida app, visitors can soon explore LEGOLAND’s Miniland attraction to discover LEGO Mythica creatures featured throughout the 4D film and capture them as digital trading cards.

LEGO Mythica – Journey to Mythica will be screening daily at LEGOLAND Florida Resort’s Fun Town Theater beginning May 27th. The accompanying AR scavenger hunt will launch simultaneously for a limited time over the summer.

This isn’t the first time LEGOLAND has employed immersive technology as part of its physical attractions. The company launched its first 4D film, The Lego Movie: 4D – A New Adventure, at LEGOLAND Florida back in 2016. This was followed by The Great LEGO Race in 2017, a VR roller coaster experience complete with hands-on interactive elements designed to keep attendees entertained while in line. 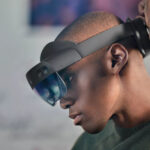 Microsoft is working on a consumer version of HoloLens