It’s been a big week for virtual reality (VR) hardware announcements thanks to HTC Vive’s very first ViveCon 2021 event. The all-in-one Vive Focus 3 was finally unveiled after much teasing whilst the big surprise was the Vive Pro 2, HTC new flagship PC headset. While both devices have plenty of tech built-in one thing they don’t have is eye-tracking which will be made available later in the year as an addon.

Eye-tracking will come by way of Chinese company 7invensun whose technology VRFocus has previously come across in Pimax and other headsets. 7invensun’s involvement wasn’t part of the main ViveCon Keynote yesterday, instead revealed by HTC China President Alvin Wang Graylin who confirmed that the Droolon F2 eye-tracking module would be available for customers in Q3 2021, priced at $299 USD.

That’s double the price of the company’s previous eye-tracking module which was available for HTC Vive headsets retailing at $149. What’s more unusual is the fact that neither headset has eye-tracking natively built-in considering the HTC Vive Pro Eye has been available for several years now. Especially where the Vive Focus 3 is concerned. The standalone headset is purely aimed at the enterprise market which is where eye-tracking would be most applicable, offering analytics and training use cases. The Vive Pro 2 bridges both the consumer/enterprise markets so keeping the cost down is understandable, plus very little content actually uses eye-tracking.

Graylin’s Tweet also mentions that the Droolon F2 eye-tracking module will be available in ‘most markets’. Considering 7invensun’s tech has mostly been for the Chinese market the launch could be the first time customers in Europe and the US can easily acquire its eye-tracking. Vive Focus 3 and Pro 2 owners will have to wait a few months to find out.

The eye-tracking module adds to the ever-growing list of accessories for the HTC Vive platform. The most recent additions include the Vive Tracker 3.0 and the Vive Facial Tracker. If you want a VR platform with lots of accessory options then HTC Vive has definitely got you covered.

7invensun has a long history with HTC Vive being one of the startups involved in the Vive X accelerator programme. 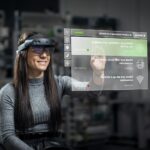