Will Virtual Reality Transform the Future of Collaboration?

While virtual reality has been promised for many years now, the cost and complexity of most VR headsets has kept this technology mainly in the hands of avid gamers and hard core technologists.

However, recent trends in headsets have brought cost and complexity way down, and many more users will have excellent VR headsets, probably during this holiday season. And while most of the use cases will revolve around gaming and entertainment, one new company thinks that VR can transform the way that businesses collaborate, both internally and with customers and partners.

This new company is called Arthur, and recently, I had the opportunity to participate in an analyst event using their virtual collaboration technology. And while there are some hiccups and limitations still in this technology, it did provide a clear vision of a future where VR collaboration and meeting spaces are commonplace.

To get connected into the Arthur virtual meeting, I used a new Oculus Quest 2 headset, which provided an excellent VR experience for this technology. However, Arthur also provides a web-based desktop interface so meetings are not limited to those with VR headsets.

Some of the cool things about Arthur. The ability to manipulate and work with the virtual environments provided lots of interesting ways to handle training, engagement, and interaction between participants.

Arthur also uses spatial audio, so someone whose avatar is close by to your side is very clear while someone further away is barely audible. And the quality of the environment made it possible to display high definition video and presentations within the virtual world.

There were also some nice little touches, like when I turned my left wrist and a virtual watch showed up on my avatar’s arm, and displayed the correct time. And overall, once the initial weirdness weared off, the whole meeting did feel more natural and even dare I say, fun, than a video conference call.

Of course, there were some not ready for prime time elements as well. There was a definite déjà vu element for those of us who did similar meetings back in the heyday of Second Life. And to avoid uncanny valley and dead eye issues in the avatars, Arthur gives each participant’s avatar sunglasses and a headset microphone to hide the eyes and mouth.

Still, there is plenty of promise in this technology. Arthur already has an impressive, if small client list who are already using it for virtual meetings. And with the rising need for remote collaboration and meetings, more businesses will be investigating this technology. In fact, recent Aberdeen research shows that 35% of businesses are planning on leveraging some form of VR.

It wasn’t that long ago that many would have scoffed at the idea of the majority of meetings and collaboration happening over video calls. Today’s pie in the sky technology is often tomorrow’s common place reality.

And don’t forget, the existence of virtual business tools like Arthur gives you a legitimate “work” excuse to pick up that cool new VR headset. 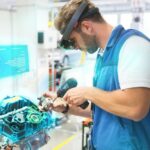 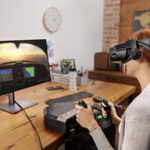