The VR application is designed to improve ADHD (Attention-Deficit/Hyperactivity Disorder) cognitive functioning, helping patients age 8 and above gain better attention abilities and reduced impulsivity, as well as help them with planning, organizing and executing daily tasks.

The VR experience is paired with a clinician who can modify the patient’s experience using different VR games and analytics.

The company was previously using VR to help patients with cognitive decline, including post-stroke victims, when it decided to add therapies for ADHD, said XRHealth CEO Eran Orr in an interview with Fierce Electronics.

“It was very surprising; we found it improved attention span,” with the ADHD trials, he said.

In one app scenario Orr described, the ADHD patients  wear a VR headset to use virtual boxing gloves with different colors to strike at virtual lights with matching colors. Distractions can be added—such as a bird nearby—to see what types of distractions keep them from completing the task.

“If they are distracted, I can refocus them and train them to refocus even when there are distractions,” Orr said.

XRHealth obtained an emergency authorization for the app from the U.S. Food and Drug Administration as an adjunct to clinician-supervised outpatient treatment and expects to offer the app later in November.

The company has already received interest on its website. “A lot of people are looking for a drug-free solution for ADHD,” Orr said.

The company already offers VR treatments for pain management, stress management, and memory decline among other illnesses, and conducts about 7,000 treatments per month.  Overall, XRHealth has developed 11 apps in nearly five years it has been in business.

A major advantage of VR treatments is they can happen almost anywhere, especially important during COVID-19, Orr said.  Patients discuss symptoms with a clinician, then that professional loads a VR headset with the proper treatment.  The treatments are covered by health care insurance, but XRHealth doesn’t publish its fees.

XRHealth uses a variety of VR headsets on the market and considers itself hardware agnostic. An R&D team in Israel develops the therapeutic games. For the ADHD app, the company plans to add eye tracking, to help clinicians see where the patient focuses attention to adapt for better treatment, Orr said.   Other companies offer VR rehab apps, but Orr said he is not aware of anybody using VR for ADHD.

Orr said patients feel no motion sickness in the therapy sessions, unlike with some VR games on the market, because the apps are relatively motionless and the refresh rate on the video is high, at 60 frames per second.

The company says 77% of patients see results within two weeks, based on several sessions lasting eight to 15 minutes.  “We assume if you are getting better in VR, you are getting better in real life,” Orr said. “It’s easy to measure improvement.”  In a statement, XRHealth said its VR training is based on the brain plasticity principle– the brain’s ability to restructure itself in an attempt to overcome challenges.

The idea for commercializing VR in rehab originated when Orr used the method to treat a whiplash injury from his time serving as an F-16 pilot in Israel.

Foto: In XRHealth’s VR app for ADHD treatment, a patient tries to punch lights that correspond to the color of the patient’s virtual boxing gloves. A clinician can then add distractions to measure the patient’s ability to stay on task, then work with the patient on ways to cope with distractions. (XRHealth) 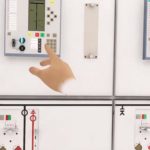 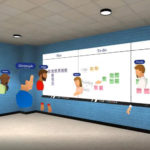