Is VR Training The Next Big Fitness Trend?

Working out just got a whole lot more high-tech, and fun.

Remember when we thought wearable fitness apps were as tech-savvy as your workout could get? Think again. Virtual Reality (VR) training has been making major strides in the fitness industry over recent years. With just a simple pair of VR headsets and controllers, you can transform your dusty exercise equipment into another type of „reality“ that might make you actually want to workout.

At least that’s the idea behind VZFit, which can be added to any stationary bikes so that users can play virtual reality games while pedaling.

VZFit was developed by VirZoom, a company founded in 2015 by Eric Malafeew, a game developer behind such favorites like Guitar Hero and Rock Band, and Eric Janszen, a former venture capitalist, and avid cyclist.

For $99 VZFit can turn your plain exercise bike into a magical virtual reality experience. If you’re interested in making your workout more fun (and who isn’t?), we got the low-down from Janszen himself on what you need to know about this new trend.

Photo by Hammer & Tusk on Unsplash

If you’re working from home with your own bike, besides the VZFit, you’ll also need an Oculus or Quest VR headset. However, if you’re planning to use a bike at a gym that’s partnering with VirZoom, they’ll likely have their own headset.

According to Janszen, the set-up is pretty simple. You attach a sensor to the crank arm of your stationary bike, which allows VZfit games to detect your speed and direction. You’ll also attach a button to the handlebars to make menu selections and control actions in the games, such as ringing a bell in the cycling games or lifting off to fly in-flight games.

Photo by Jonny Kennaugh on Unsplash

When you first get on the bike and don your VR headset, you’ll select one of two VZfit applications, either VZfit Play or VZfit Explorer, says Janszen.

From there, once you’re inside the Oculus Go or Quest headset you’ll control your avatar, which you can select as a cyclist, a Pegasus rider or a tank driver.

You’ll move your avatar through huge virtual worlds: country roads, a river valley, a bright Southwestern US canyon. You’ll also be challenged by racing through gates and are rewarded to completing challenges faster.

„You race with AI avatars or with other players in real time. You can talk to them, too,“ says Janszen. „Alternatively, you can explore worlds at your own pace, or meet up with friends to explore and chat.“

Much as in the real world, the action is all around you in VR. „You are reacting to the world and the world is reacting to you,“ says Janszen. „You get so caught up in these VR activities that you don’t realize that you are getting a workout. Our customers call it the ‚workout without the work.'“

Says Janszen: „You are not merely distracted from the fact that you are pedalling a stationary bike. The bike becomes an extension of your body, and your activity in VR is so engaging that you can easily lose track of how much time you are there. As the minutes tick by, you are burning serious calories.“

According to Janszen, VZFit is suitable for every fitness level, „from athletes seeking to stay in condition during winter months to rehabilitation patients with limited mobility, and all athletic levels in between.“

Photo by JESHOOTS.COM on Unsplash

How Does VR ‚Really‘ Feel?

Janszen says the most common question they receive is about wearing a headset while working out. „Some consumers may expect this to be uncomfortable. In reality, it is not,“ he says. „Once you are in VZfit worlds you are so wrapped up in VR activities that you quickly forget that you are wearing a VR headset. We have shipped thousands of VirZOOM product with a 30-day money-back guarantee since 2016 and only a handful of customers have ever returned one because they found that wearing a headset was uncomfortable.“

Another question they receive often is just how VR games stack up against traditional cycling. „Some customers cannot identify with the idea of playing VR games to get exercise because they don’t play video games on a regular basis. For these customers we offer VZfit Explorer. Explorer lets you ride in real-world settings, and feels more like riding a bike in the real world.“

Photo by Frank Vessia on Unsplash

Is VR the Future of Fitness?

Up until recently, VR fitness applications business was largely confined to start-ups, Janszen. Now, „we are starting to see interest from some of the largest companies in the world.“ Janszen predicts that „once the marketing and distribution power of large, established companies comes into play, you’ll see the industry explode.“

As for why he thinks VR is the inevitable future of fitness, Janszen says it’s because VR presents „a revolutionary new medium for delivering interactive content that motivates physical activity. VR fitness applications give us a completely new way to be active and get exercise. These applications will never replace other forms of exercise, but will fundamentally change the way exercise, in much the same way that smartphones changed the way we receive information, communicate, drive, and engage in daily life.“ 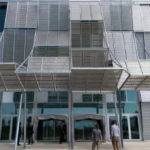 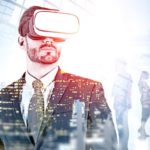 How To Fit Virtual Reality Training Into Your Performance Management Strategy