VR training has become a best practice at Farmers Insurance Exchange. Its claims adjusters are being exposed to more scenarios and learning how to do their jobs faster with the help of VR.

About two years ago, Farmers Insurance Exchange started using virtual reality to train claims adjusters. The technology created, in virtual space, actual conditions that employees face in the field. It proved successful at speeding up employee training, and a more advanced approach is being piloted.

Claims adjusters investigate things like car and water damage. They assess the damage and negotiate claims with customers and businesses, such as auto body repair shops. The initial implementation of Farmers‘ virtual reality (VR) training focuses on identifying and assessing claims. Its next iteration uses a „virtual human“ to help with negotiation skills.

In the past, novice claims adjusters learned by traveling with a more experienced adjuster. Knowledge was gained with field experience and time, Murray said.

VR training accelerates that process. It virtualizes the types of problems adjusters tend to encounter. In the VR simulation, the trainee is taken through the investigation process virtually. For a water damage case, the adjuster-in-training uses VR to tag all areas that are water-damaged as well as the source of the leak.

„It would take you years to go through what we’re able to do with virtual reality,“ Murray said.

VR training does not completely replace field training, but it speeds up an adjuster’s readiness, Murray said. It also reduces the travel needed for training adjusters at various offices. As long as adjusters have access to VR training equipment, they can train.

Farmers is so convinced of the usefulness of VR training tools, it is investing in the firm that makes them.

It is using technology from Talespin Reality Labs, Inc., in Los Angeles. In early March, Talespin received $15 million in Series B funding led by Cornerstone OnDemand Inc., a learning tools maker; the funding series included an investment from Farmers.

Talespin’s technology includes a conversational avatar, „Barry,“ that was designed for use in HR. The avatar was programmed to be an employee being terminated by the manager. Barry was challenging and at times difficult in the back-and-forth discussion with the HR manager. It was not a product, but a demonstration of where the technology may go, according to Kyle Jackson, CEO of Talespin.

The intent of virtual human training is to teach things such as leadership bias, performance management techniques, communication practices and customer experience training, Jackson said. Trainees speak to an avatar the way they might speak to a person, and the avatar is designed to respond with a „believable, emotional and relevant reaction,“ he said.

Difficult discussion with an avatar

The VR itself can have different preconceived outcomes, Jackson said. Talespin uses machine learning to give the avatar an ability to understand and flexibility in how to respond, he said.

Farmers is piloting the avatar technology. The idea is to put the trainees through „difficult discussions“ to improve their negotiating skills, Murray said.

Trainees will practice skills with the avatar such as „active listening, understanding and being empathetic,“ Murray said. If a trainee makes a mistake, the avatar might get angry, a reaction that the trainee tries to avoid, he said.

„We’re preparing people to be more confident and have the ability to provide a better experience for our customers,“ Murray said.

Brian Kropp, chief of HR research at Gartner, believes that VR training may see wide adoption, especially as third-party companies acquire the capital and scale to build digital learning content. Large firms, such as Walmart, have already built their own VR content.

The investment that Farmers is making in VR technology may speak to its applicability for other insurance firms, but also how VR training develops across industries, Kropp said.

VR training is making headway in many different areas. There are startups that provide HVAC-specific VR training or forklift operations. Another area is trucking.

Advanced has two approaches: a flat-screen simulation-only training, and a more immersive system that uses a headset. With the simulator, the student sits in a seat with a gear shift and steering and indicators and learns to shift and drive. But the virtual reality with goggles adds a level of realism, Smith said.

The use of simulators helps students get comfortable with operating an actual truck so that „it doesn’t feel strange to you,“ Smith said. 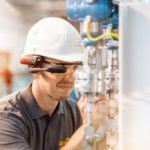 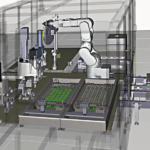