You’ve got to take the elevator just about as high as it will go in Chicago’s United Center, then circle a ring of high-end suite seating before you finally find a room marked, on a small decal in the upper right of a gray door, with the words, “TRUE VIEW,” and the Intel logo. The room is cramped, tightened further by walls plastered with television monitors and a team of a half-dozen technician/editors solemnly tapping computer keyboards. The space is small enough that any of the techs could swing an elbow and conk three heads on the other side of the room.

It doesn’t look like a place where the way we watch sports is being forever transformed. But that’s what happens in this room, home—for last month’s NBA All-Star Weekend, at least—to the beating heart of Intel’s True View technology. Here, editor/technicians feed national and regional broadcasters, provide content for the virtual reality broadcast, give in-arena Jumbotrons spectacular view as they cobble together 360-degree replays from every angle in about a minute.

When you watch a play that looks like it is something out of The Matrix, these are the folks who make it.

Here in the True View room, a technician is sitting at a console looking at feeds of Luka Doncic making a 3-pointer from various camera angles during a recent game in Dallas. There are 38 cameras in all and in a matter of seconds, Doncic is paused in mid-air and we can see him straight on. The angle rotates. We see Doncic from behind and from all sides—the look on Doncic’s face is frozen, the positioning of the other players is locked. There’s a beer vendor in the aisles in the background. You can see him, too.

“We have cameras in 10 different locations around the building,” said Nadia Banks, business development manager for Intel Sports. “There’s multiple lenses at each location, each pod. So there isn’t much that happens in the arena that the cameras are going to miss.”

It’s still relatively new technology for the NBA, set up in only a select few places: Chicago, Milwaukee, Cleveland, Dallas, Indiana, Washington and Atlanta. A state-of-the-art system has been installed in Sacramento, too, which will be used for research-and-development. But the NBA, along with the NFL (where it can be found in 17 stadiums) and some soccer teams in Europe, has been making a major bet on True View as the heart of the sports broadcasting’s future.

That’s because the True View tech will be the driver of virtual reality broadcasting. Forget your 60-inch QLED—sports viewing is moving toward 3-D goggles, which might sound intimidating to fans who just want to sit and watch a game. We’ve been watching sports pretty much the same way since the first sports broadcast in 1939. That’s part of the reason VR, which has been hyped for years now as the Next Big Thing in broadcasting, has not caught on among rank-and-file fans. Not yet, at least.

An up-close look at an Intel True View camera pod at the United Center in Chicago. This one has six cameras. – SEAN DEVENEY

Intel is betting that the demand for VR will catch up with the ever-improving technology. It’s not all that complicated to begin watching games in VR now—those who have the Oculus or Samsung Gear headsets only need to download the NBA on TNT VR app—but only a small percentage of fans do so. The idea for a company like Intel and its NBA/TNT partnership is to prepare to give broadcasters and fans of the league something they don’t even know they want yet.

As Shawn Bryant, Intel Sports’ managing director, said, “It’s the old adage, if you asked in the 1700s what a better form of transportation would be, the answer would have been, ‘A faster horse.’ No one would have said, ‘A car.’ We’re trying to think about the car.”

‘Having A Cool Conversation About What We’re Seeing’

Throughout the All-Star festivities, Rip Hamilton sat in the front row of the media section high above the court at the United Center, alongside play-by-play man Noah Eagle. This was Hamilton’s perch for the weekend, where he provided color to viewers watching the events of All-Star weekend in virtual reality. Hamilton—a 14-year NBA veteran and three-time All-Star—had done some work as an analyst before but working in 2-D is different from guiding fans through a game in VR.

Now in his second season broadcasting in VR, Hamilton had to acclimate himself to the notion that his audience is not confined to the same broadcast feed that he sees. They’re seeing it from whatever perspective they want, whether it is a bird’s-eye view, a look from behind the basket or from the star player’s eyes. Viewers are not tethered to the decisions of the production truck. For Hamilton, then, the job is to describe the action in that context.

“You kind of direct it,” Hamilton said. “That’s the good thing about it. We are having a conversation with the viewers like we are all together, sitting in our seats, having a cool conversation about what we’re seeing right there. So I am able to navigate through the cameras and say, ‘Hey, look, LeBron James just drove to the rim, look through the glass cam and see how high his vertical jump is, how high he gets to the rim.’”

When Bryant says he wants his group to, “think about the car,” this is what he means. The car is the ability to see a game in a completely immersive environment, the same way that devotees of video games can experience Fortnite. You’re not just watching a game, you’re surrounded by the United Center the same way a gamer playing Call of Duty might be surrounded by the burnt-out streets of Berlin. In fact, NBA2K has been a touchstone for the development of Intel’s NBA VR product.

“I call it the, ‘I have a kid,’ analysis,” Bryant said. “Watch what your kids like. I have 11-year-old twin daughters and a 13-year-old son. The way they consume content, it’s a combination of watching the live broadcast, catching up on social media and playing video games. So that creates this cycle, ‘OK, what can we learn from that?’ We learn from how children interact with the NBA2K game, the different camera angles they expect.”

It’s one thing to recreate that setting in a fictional world but something entirely different to apply it to an unpredictable live event. Over the past four years, Intel has been ramping up its ability to provide a realistic experience, adding manpower, improving its technology and incorporating new ideas. The broadcasts are only four years old but the improvement has been steady at all levels—for example, it used to take True View editors four minutes to create a highlight that now requires as few as 60 seconds. Still, it’s been Intel’s approach to under-promise and over-deliver.

“What we know,” Bryant said, “is that this generation of fans is expecting to watch what they want, how they want, when they want to watch it. What we’re doing with TNT and the NBA, we’re trying to make sure we stay in lockstep with the evolving tastes of viewers without lowering standards.”

In The Truck: Where The VR Broadcast Comes Together

It’s out in a frigid broadcast truck that all these elements feeding the VR experience come together: the horde of camera pods around the United Center, the frontline True View editing crew, the commentary from Eagle and Hamilton, the vision of a gameday experience that puts a viewer into any spot in a given arena. This is where the empty canvas of VR broadcasting is filled and over the course of All-Star weekend, the truck was buzzing, packed with a crew of 32 and almost no empty seats.

At one point, the show’s director, Bobby Hayden, said to senior producer Rusty West, “You ever think you’d see a day where we filled up a whole truck?”

In the beginning, the VR operation was run out of a van. There were four camera pods and a team of employees with backgrounds in standard broadcasting, struggling to figure out how to produce a show in virtual reality.

“The tactics of how to do it, there was no template for that,” West said. “I mean, no one has ever done it—four years ago, no one had ever produced a VR show. It’s the simplest things, like how do you get from one camera to another? With a regular camera in a broadcast, you cut and go to another camera. But with this, how do you do it? So, in VR, when the camera changes, it is a dip to black. It’s a simple thing but it is a big decision.”

For the crew working a VR broadcast, there is a wealth of content coming in from the camera pods and the True View booth. The bunch has an additional producer who puts together entirely different threads of stories to go along with the game action. “She tells her own stories on the side,” West said. “That’s the great thing, there is no limit on what we can include.”

With a VR headset and a good dose of curiosity, then, a user can chase endless aspects of a game, whether it is a player’s sightlines or Jack Nicholson’s view or whatever it is the beer vendor sees. That level of control is disorienting at first—I tried on a VR headset for a Lakers-Celtics game and found that I spent as much time trying to figure out where to click as watching the game itself—but once you focus on what you’re seeing, it’s an impressive experience.

Sports in VR is a work in progress, but that’s the idea. It’s evolving and getting more accessible as it does—you’re already seeing True View replays on Turner and in NBA highlights, which is a bit like a small taste of the technology, a VR preview.

“We always have to be thinking about what’s next, what’s next,” West said. “Our tech guys want to kill me all the time because they say, ‘Let’s just do a show.’ But no, we always have to add stuff. That’s the beauty of this. It’s wide open. The technology is always getting better, so we have to get better at telling the stories for viewers.”

The product is there—it’s well-crafted, entertaining and interesting. All VR needs now is more users.

Foto: Inside Intel’s NBA on TNT virtual reality truck outside the United Center on All-Star weekend. This is where the feeds from 38 cameras inside the arena are fused into a VR broadcast., SEAN DEVENEY 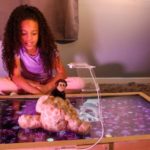 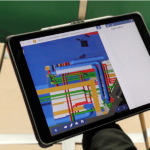 5 Dos and Don’ts of Using Augmented...

Unlocking the Magic of XR With Your...

Nreal Plans for Major Growth With One...