USC is connecting families through the power of AR play.

When you were a kid did you ever build wondrous worlds with your awe-inspiring imagination; perhaps while sitting around the coffee table with your memaw, papaw, nonna, poppa, grandma or grandpa? No matter what you called your grandparents or caregivers, imaginative play with loved ones fosters creativity, perspective, and critical thinking.

Today, however, more families than ever find themselves living further apart from one another, across cities, states, countries, and continents. In-person playdates are becoming increasingly rare and infrequent.

According to a recent study conducted by AARP, distance is the biggest barrier to seeing grandparents: “Over half of grandparents have at least one grandchild who lives more than 200 miles away, and about a third live more than 50 miles from their closest grandchild.”

Although families are living further distances apart and demanding work schedules continue to be demanding across generations, loved ones are still finding ways to spend time and connect through the use of new technologies.

At the University of Southern California, undergraduate students from the USC School of Cinematic Arts, Media Arts + Practice Division, and USC Jimmy Iovine and Andre Young Academy for Arts, Technology and the Business of Innovation, teamed up to create AR Playdates, an augmented reality (AR) connected play platform that enables loved ones to play together no matter wherever they are in the physical world.

The project was led by Ethan Bresnick and JD LeRoy to restore quality time for families in separate locations by enhancing interaction with physical toys that children already own and love.

AR Playdates is an example of augmented reality — virtual graphics overlaying the physical world. Embedded infrared and color cameras capture live video of hands and toys on the playing surface. The image is live-streamed to a matching device in a separate location.

By combining an array of existing technologies, such as live video streaming and depth sensors, the student team created a new device that offers almost endless ways to play. For example, a boy and his grandfather raced and played with Hot Wheels cars side-by-side from separate locations.

FaceTime, WhatsApp, Skype, as well as devices such as Facebook Portal and Amazon Echo Show, are popular ways for families to stay connected. AR Playdates refines this interaction with multigenerational imaginative play for almost any kind of toy, such as action figures, robots, cars, building blocks, and plushies, as well as activities such as arts, crafts, games, and reading. AR Playdates can also be used independently by children for imaginative AR effects to enhance independent play.

“Play is one of the most important ways to share knowledge between generations through storytelling and imagination. While video calling apps like FaceTime serve spoken conversations, the configuration of front-facing cameras and limited visual effects make the communication very rigid and formal. AR Playdates positions the camera system on a flat play surface and has fun AR effects and interactive backgrounds that enhance playtime,” said Ethan Bresnick, co-creator of Playdates AR and Student Researcher, USC Media Arts + Practice.

Looking ahead the AR Playmates team believes their research could inspire a new direction for connected play products and greater collaboration between USC and technology and toy designers. 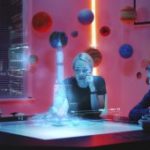 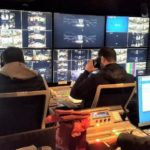