Build a Better Future with Augmented Reality for Manufacturing

Augmented Reality (AR) is slowly but surely entering the mainstream consciousness, with the record-breaking downloads of Pokemon GO and the widespread adoption of Snapchat acting as strong proofs of concept for even the most cynical of investors.

But there’s more to AR than entertainment. With its ever-improving software and hardware, it promises to have valuable real-world applications. And one industry we predict will benefit hugely from the introduction of AR technology is manufacturing.

AR for manufacturing has the potential to cut production downtime, identify issues, and streamline processes. Let’s take a quick look at how Augmented Reality applications in manufacturing will transform this industry.

What Are the Benefits of AR for Manufacturing?

There are a number of benefits to introducing Augmented Reality to the manufacturing industry, mainly centred around efficiency and productivity.

With AR, you can:

By utilizing Augmented Reality apps and technology on the factory floor, engineers can work faster and smarter by viewing digital information overlaid onto the real-world environment. This makes them less reliant on interpreting schematics, instead receiving clear guidance and instructions via AR with regards to assembly.

Using Augmented Reality applications in manufacturing can also ensure maintenance and productivity can be carefully monitored and reviewed throughout the manufacturing process. Issues can be quickly diagnosed and resolved in real-time, without slowing production.

One of the major impediments to the manufacturing process is the accessing of accurate and up-to-date data. Often, engineers need to stop what they’re working on and search for parts and scour a database for blueprints.

However, thanks to AR, this obstacle can be sidestepped as important information, including inventory, lead times, and specs, can be summoned in real-time without disrupting the flow of production.

For example, an AR app could be used to overlay a virtual representation of a design onto a real-life product, allowing engineers and designers to quickly assess the situation and pinpoint flaws, therefore preventing issues from arising and production slowing or stopping altogether.

Finally, Augmented Reality has the potential to transform the way training is conducted by manufacturing companies.

Like Virtual Reality training modules, AR applications can provide a level of immersion that contributes to more effective learning. And on-the-job training can be carried out with a greater degree of freedom, without the fear of making mistakes.

The benefits of AR for manufacturing are clear, but what are the real-world applications? Well, here are four areas that will almost certainly be impacted by the introduction of Augmented Reality technology in the not-too-distant future.

The clearest application of AR in manufacturing is in product assembly. The modern assembly line requires diligently piecing together hundreds, or even thousands, of components in the correct order and as fast as possible.

And typically, the instructions involved are made available as PDFs. These documents are long, detailed, and static, meaning they can very quickly become out of date.

To counter this, Augmented Reality applications projecting step-by-step instructions via an AR headset could allow the assembly line to operate quickly, work hands-free, and respond to issues with up-to-date information.

Here’s a great AR assembly line concept to give you an idea of its potential:

Of course, the assembly line is only one part of the manufacturing process. Augmented Reality can also be used to maintain and repair the equipment involved.

Instead of using a manual to pinpoint problems and implement solutions, AR can help improve maintenance by reducing the time spent on research, and helping those responsible visualise the issue and the fix.

By using a tablet device or an AR headset, engineers can quickly address maintenance problems and keep factory downtime to a minimum.

Here’s a great example of an AR maintenance app in action:

Another important and useful feature of AR for manufacturing is the ability to access instant expert support. Whereas previously support would require a physical presence on site to step in and explain a solution, Augmented Reality technology allows for a kind of telecommuting.

Technicians could therefore see what the manufacturer sees, all from the comfort of their own office, therefore cutting travel time and costs, while guiding the engineer on site to fix their problem.

What’s more, this type of support can help bridge an ever-widening skills gap in the manufacturing industry, allowing companies to supplement their employees’ knowledge with off site engineering expertise.

Finally, manufacturing quality assurance (QA) could be greatly improved with the introduction of Augmented Reality technology.

Whereas most existing QA processes ultimately rely on the human eye to spot problems, AR can be used to project digital overlays onto products and highlight inconsistencies. This can speed the process, allowing technicians to identify even the most minor of issues with a greater degree of accuracy.

Here’s an example of AR for QA in action:

The manufacturing companies using Augmented Reality are already a step ahead of the competition. By implementing this technology across the areas we’ve discussed, they can reduce costs and increase production, all while minimizing mistakes and improving overall quality.

And investing in AR now just makes sense. A steady introduction of AR into existing manufacturing processes will allow for a smooth transition, instead of a panicked attempt to catch up with savvy competitors in the future.

How Can AppReal Help?

Our talented team of AR app developers have their finger on the pulse of the latest AR manufacturing trends, and we’re ready to bring your Augmented Reality application to life.

With a high level of experience in custom app development across a wide range of industries, we can guide your idea from concept to completion. You’ll receive an AR app that will support your engineers and boost production.

Build a Better Future with Augmented Reality for Manufacturing 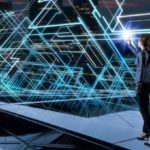 The Immersive Development Pipeline for VR, AR, and More 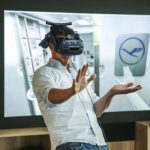