The company may be hoping you won’t need an iPhone in your pocket when you can wear one instead.

In the not-too-distant future, there’s a very real chance that you might look at the iPhone you carry around with you as an unnecessary piece of technology.

That’s at least what Apple believes, if a newly leaked presentation is any indication. The Information on Monday published an Apple presentation that discusses the timeline the company has placed on releasing augmented reality glasses. In the presentation, Apple said that it plans to release its first augmented reality headset in 2022, followed by a better-looking version in 2023.

In about a decade, according to The Information, the presentation said augmented reality glasses will ultimately replace smartphones and make the handset you use each day obsolete.

Augmented reality describes a technology in which virtual elements are overlaid on the real world to provide contextual information. That information can range from navigation directions overlaid on streets to random facts about buildings popping up over them as you drive by. It could also include ads, of course. Virtual reality is a similar but different technology that places people entirely inside a virtual world.

Apple CEO Tim Cook has made it clear that his company firmly believes augmented reality, and not virtual reality, is critical to the future. Apple has already added some augmented reality features to its iPhones, including a measuring app that lets you view an object through the iPhone’s camera and measure its length or height with software interpreting its distance.

But that’s just the start.

Apple has been rumored for years to be working on AR glasses. Earlier this year there were even reports about Apple launching its first pair of glasses next year. The idea is users would wear the glasses and get fed useful information. They might also be alerted to text messages, phone calls, and even video conferencing from the glasses.

Still, this is the first time that something truly concrete from inside Apple’s notoriously secretive headquarters has leaked about the company’s plans for augmented reality. And perhaps most importantly, the leak points to a life beyond iPhones.

Indeed, that life beyond iPhones could prove critical for Apple, which has watched its iPhone revenue slip in recent quarters. Demand for the company’s phones is still high, but with people holding on their phones for longer–and balking at the hefty price tags attached to today’s top smartphones–it’s getting harder for Apple to sell its hardware.

In turn, Apple has turned to alternatives. Chief among them now is the company’s Services business, which includes Apple Music, Apple TV+, and others. But the leak suggests Apple is also eyeing the future of its hardware business. And it’s firmly rooted in AR.

But before AR glasses become bigger than the downright gigantic iPhone business, Apple will first need to prove that people will want to wear these devices on their faces. Not everyone is so keen on wearables, and while Apple Watch is popular, it’s an easier sell to have someone attach a piece of technology to their wrist than right in front of their eyeballs.

Then again, this is Apple we’re talking about. The company has found ways in the past for people to dramatically change the way they live and work, and it could do it again. Apple might also get some help from companies like Microsoft and Google, which have also invested heavily in augmented reality and similarly have vested interests in seeing it become big business.

For now, though, Apple’s work continues. And at least for the next couple of years, we can expect to continue using iPhones. Just don’t be surprised in a decade or so if you look back on your days using iPhones and laugh. 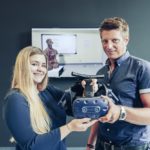 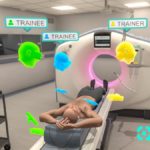