Not long ago, we had a client inquire about virtual reality (VR) and quality training. VR and its close relative, augmented reality (AR), are hot technologies right now, not just in entertainment, but also in industry, including their use in training. So it’s no surprise that clients inquire about them. However, as with any technology, you must pick the right tool for the right job, and VR and AR are not always the right choice.

VR is a technology that allows a person to feel immersed in a 3D virtual world. This is usually achieved using a headset with a separate display for each eye. Unlike a single-screen view of a 3D scene, the slight parallax in views for each eye gives the viewer an immersive, 3D effect. Headsets range from $10 for Google Cardboard with your mobile phone, to well over $1,000 for self-contained headsets.

Movement of the headset wearer’s head is detected by the accelerometer and/or gyroscope in the mobile phone (Google Cardboard) or the proprietary headset. This movement is then used to adjust the view of the two cameras, one for each eye, in the 3D virtual scene. As you move your head, the scene moves.

A single-point VR experience may be achieved with a 360° video camera, as may be seen on YouTube. However, this is extremely limited. To move through a virtual world, a full, textured 3D model of the virtual world is needed.

To achieve this, game engine software is used to help take a 3D model of some scene and render it to the screen, at frame rates of 60 times per second or more. This allows any type of character, vehicle, or object in the scene to move in any fashion and to be rendered at these high frame rates. The result looks as smooth as a video, but it is different every time it is played because the user interacts with the scene differently each time. Almost any kind of user interaction imaginable may be used, from simply clicking buttons to steering characters with any form of user input. A game engine gives game developers an easy way to use complex computer code to control a scene and the objects in it. It is the nirvana of the much lauded and sought after “gamification” in training.

If you’ve never tried it, the initial experience of VR is quite amazing. And for some types of training, it makes a lot of sense. For instance, some companies use VR to train people to perform certain physical tasks—an assembly operation, for instance. They interact with a VR world, i.e., a manufacturing process, in the same way they will react with that process in the real world. However, in a business environment, particularly for business-related training, this has some serious drawbacks.

We considered a VR version of our quality training since people had asked about it. It’s relatively easy to add with the game engine technology we are using. However, after a little testing we decided against it, mainly for health and safety reasons. Many adults quickly feel nausea with VR, although kids have less of a problem. Depending on the type of scene and its movement, it is also possible to get dizzy or disoriented, and fall over if you are standing.

VR’s nausea is exacerbated by scenes without a stable horizon, such as on a ship, car, or some other moving object. Poor device performance, which can create a mismatch between head and scene movement, exacerbates the problem. The requirements needed for high-end (fast) devices to adequately render VR would limit users to specialized devices, which would also limit the training’s accessibility.

VR also totally removes users from their environments. This might be advantageous if you need an immersive environment to reinforce physical movements (such as specialized assembly operations), but it is less appropriate in a business situation. For learning on the run, public transportation on the way to work for instance, interactive 3D on a mobile phone is a more ideal approach.

The key to success using technology-based learning is interactivity: “I do, and I remember.” Herein lies another difficulty with VR. ITs default interaction mode is Gaze Input. Stare at a button, for example, in the center of the screen for a given time, say, two seconds, and it is activated. With multiple buttons or sliders, or where dragging objects is required, this becomes completely impractical.

VR-based training thus requires an interactive input device. There are many, including hand-held controllers, such as the Google Daydream, or a Wii Remote. Devices such as the Leap Motion where hand movements in space are detected and used as inputs. Then there are glove-style devices such as the Valve Knuckles Controller. Some of these, such as Leap Motion, rapidly become tiring from holding one’s hands in the air. There is no universal interface, and all must be individually designed to work with the software. None of them are anywhere near as precise, rapid, and natural as simply touching a screen with a finger.

By contrast, interactive 3D on a mobile phone is easy, practical, and engaging. No special devices are needed other than your phone, tablet, or PC. Touch, mouse, and drag-and-tilt controls are flexible and natural. With interactive 3D, the boring, text and talking heads of e-learning are rendered obsolete.

VR does have many specialized applications in industry, such as large-scale flight simulators, remote medical surgery, and astronaut training. However, for business-related training of the average employee, it fails to add any real benefits over interactive 3D on a PC, phone, or tablet. So, choose the right technology for the right job.

As a relative of VR, augmented reality (AR) overlays computer-built information upon the real world. The software recognizes real-world surfaces. It places virtual objects, information tags, or moving virtual characters on the real-world objects. AR may allow virtual objects to move around-real world objects. It may use a headset, but it also allows the users to see the real world around them. AR keeps students in contact with their environments but is more limited in its training usefulness. It’s fun seeing a spaceship flying through your kitchen, but building the technology into useful training would be difficult. When used without a headset, AR can display virtual images overlaying real world images. For example, it is an excellent application for visualization of ground-piercing radar data.

AR may also be used without a headset, to overlay information about some scene, such as services in a street, viewed via a mobile phone’s camera. Again, as with VR, useful industrial applications come into play when users must interact with, or be trained on, real-life objects.

Finally, when AR and VR require a headset, the weight and pressure can become annoying after a few minutes. This is less an issue with AR, where the computer-generated image can be projected onto the inside of lightweight glasses. However, the need for glasses or goggles for an extended time further confines VR and AR to niche applications rather than general training applications.

VR and AR applications will grow but perhaps not as dramatically as initial hype may have suggested. There is little to be found in everyday VR training applications and certainly almost nothing in quality training. VR seems to have been largely abandoned by Google. After much fanfare in 2016 and 2017, the technology now gets little mention. Other dedicated companies, such as Oculus, are pushing ahead with the technology and will find increasing, but narrow, applications.

Quality training for all

In contrast to AR and VR, interactive 3D on a mobile device or PC is very practical. Most people probably don’t fully appreciate the enormous possibilities opened up by using a game engine for producing captivating business training. Rather than developers working within the strict and limited confines of “pop-out” e-learning development tools, a game-engine platform is limited only by the developer’s imagination. Even in 2D, the ability to create custom code makes almost anything possible. Using a fun, full-motion, 3D interactive game, users can be taught quality basics, even control charts, in ways that invite them to interact with the game and reinforce training. And it can be done anywhere, anytime, on a standard computing device, including a mobile phone, without the need for special eyewear or input device. Anyone can use it and learn the meaning of world-class quality. 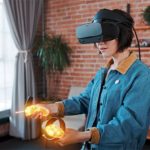 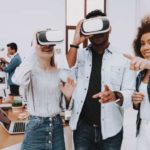