This guest post was written by Brian and Jennifer Cauthers.

Inside this post are 5 augmented and virtual reality creation tools for students! Imagine holding the solar system in your hand and being able to walk around the planets. Would that have helped you to develop a true feel for what you were learning? What if you could bring any content to life for your students and view it as if you were part of that world?

Now imagine your students creating a virtual world for others to experience in order to make their learning visible? You might think it is out of reach financially or it is too difficult to learn.

Luckily, augmented and virtual reality tools (often abbreviated AR and VR respectively) are becoming readily accessible to anyone with a smartphone, tablet or even a Chromebook.

The technology giants of the world have found ways so that the average person can create their own AR and VR worlds with very little training or gear.

What is the difference between Augmented Reality (AR) and Virtual Reality (VR)?

Virtual reality brings you into a world that doesn’t exist in real life. However, through the use of special goggles or a viewer that look like a mask of sorts, you can feel as though you are truly part of the world. You can even walk around and interact with the objects in the world. On the other hand, augmented reality places virtual objects into the world around you using a device, such as a smartphone. It alters the surrounding world so that you can interact the with objects, and walk around them without requiring goggles. This makes for a different experience because you can still see the world around you, and it can even be easier on your eyes compared to VR experiences.

The tools listed are in no particular order and are tools that are readily accessible with smartphones, tablets, Chromebooks or even desktop computers. Please note that if you use a Chromebook or desktop, you will only be able to view the creations by using your mouse and keys to navigate through the scene instead of true AR or VR experience.

This is web-based and also has Android and iOS apps for creation and viewing. The tool allows the user to create true virtual reality scenes that can be viewed with VR goggles to fully interact and move around the scene. Alternatively, you can also view and interact with the scenes on a Chromebook, tablet or computer.

CoSpaces has a set of starter backgrounds and a rich library of characters and objects to build your scene. We love the fact that you can also import 3D objects from sites such as TinkerCad, Poly, and Sketchup. The true power of the tool comes from the ability to use block code or javascript to animate the objects and add interactivity such as speech bubbles, movement, and switching to different scenes. If you want to get really geeky, there is a physics integration to give your objects mass and friction, which can be programmed with code as well.

There is also a new partnership with Merge Cube (an up and coming AR tool) to create AR experiences for your scenes that will be released this fall. Merge Cube is a foam cube that acts as a marker to view AR experiences through different apps. Merge is a new tool that is moving quickly to break through in the education marketplace. Look for more partnerships soon from this one!

CoSpaces has a free version for teachers and students to get a taste of the experience and also a paid version for a richer set of tools and objects. This is definitely one of our favorite tools for students to not only practice their coding skills but to allow for a creative outlet for storytelling, imagery, step by step processes and even virtual galleries or tours. The site also has many shared spaces that users can view.

Have you experienced Google Expeditions? If you said yes, then you will love Tour Creator. It is Google’s public version of a Google Expedition style creation tool. The features all look similar to a regular expedition, allowing users to add points of interest, descriptions, pop up images and even audio narration.

The highlight of this tool is the ability to obtain 360 images from the street view on Google maps. This is a game changer for most users because many classrooms do not have access to a high quality 360 camera or cannot visit places of interest related to their content. Overall, users can create a VR tour with multiple scenes and high-quality imagery to guide the user through an experience.

Users can share their work publicly on Google’s warehouse for VR and 3D content called Poly or keep it private. Ultimately, it is amazing for students to make their work accessible to others across the globe.

ThingLink enables the user to create a highly customized and interactive 360 series of images. It is very similar to Google’s Tour Creator but has a greater ability to customize the points of interest. The user can create custom buttons for the “hot spots” or “tags” to allow a user to gather more information. The tags can contain more than just text, audio or an image. The tag can link to a URL, embed content (google docs, maps, Padlet and more), play a video, or link to another 360 image.

The downside to ThingLink is that you have to upload 360 images (from your camera or downloaded from sites such as Flickr) or use their library of high-quality images. There is also a feature that is not widely known within ThingLink, which is the ability to create popups at specific times on a 360 video. Users can easily use videos published to sites such as YouTube (obviously giving credit to the owner) to create their interactive experience. This is a feature that is unheard of for the education sector at a reasonable price. One downside is that in order to get the 360 editor, you must switch to the paid version, which starts at $35 per year.

Many AR apps on the market are mostly for entertainment purposes. Remember Pokemon Go? As the technology is becoming more accessible and easier to program, there are some apps that are starting to gain traction in the education sector. Metaverse allows users to program an AR experience in a web-based interface that is easy to use and highly customizable. Creators can add images, interactive questions, animated objects, sound and more to engage the user.

The tools is very quick to learn and helps students with step by step planning and storyboard style programming. Many users are creating metaverse experiences for digital breakouts, scavenger hunts and even review style interactive games. To share your experience, the site generates a QR code that will open the experience in the app or you can simply share the link. You can also search the library of shared experiences.

Unfortunately, the creations can only be viewed on a mobile device at this point. If you have Chromebooks that can run Android apps, you may be able to view with the android app. If you’re looking for privacy information and COPPA compliance for users under 13, it is available here: http://help.gometa.io/terms.html.

AR Viewing and Creation: Mobile and Tablet
Free and some paid
http://quivervision.com

Any time we hand out a coloring worksheet to our students they absolutely love it. Wouldn’t it be great to make coloring educational and have it come to life? You can with Quivervision! On the website, users select digital coloring sheets to print for their students. There is a great educational starter pack for free, as well as a set of about 30 mask templates.

Once printed, the user colors the worksheet and then uses the app on their mobile device or tablet to make it come to life in AR. The education pack has several objects that include interactive quizzes and animations, including a volcano that erupts. However, this does not feature any student creation yet, right?

To allow your students to make their learning visual, use the recording tool to describe different features on the worksheet, and narrate key features. You can then share your videos on something like Flipgrid or Padlet.

The newer mask worksheets include AR masks that attach to your face when you use your rear-facing camera, almost like some Snapchat or Facebook AR stickers. As you move and talk, the mask follows your motion, such as blinking, opening its mouth, and appearing to talk as your mouth moves. Students can use this as a creation tool to use the tablet screen recorder to record the mask actions and then smashing it with an app like Screencastify to add the audio narration.

It is a few steps, but could you imagine having an animated mask of a penguin to tell its story of becoming threatened by climate change in Antarctica? Videos can also be shared in Flipgrid or Padlet for peer review.

We had to include this one because our math folks are always forgotten. However, since it’s a limited audience, we didn’t include it in our top 5.

We cannot forget about our math teachers! It seems like so many tools today for student creation do not have sound applications for math users. Wait no more. Geogebra, enhanced its toolkit to include an AR app. At this point, it is only available for iOS on iPhones with AR kit.

GeoGebra has a library of preselected images for users to explore, along with questions to engage. For example, users can explore a spiral staircase in AR to see it from various perspectives and also look for circles. The key feature allows the user to explore graphs of custom input functions in AR. The user can explore the graph from every angle to get a real feel of what it truly looks like in all dimensions. You can also graph two equations simultaneously and see how they intersect. For students that are visual learners, this is a true gem.

If your students know how to take a screen recording on their phone, they can record the screen as they explore the graph. They can then app smash it with a tool such as Screencastify on their desktop or Chromebook in order to add audio narration to explain the graph. This is a true blend of creation and making learning visual for students in math.

In the grand scheme of things, AR and VR tools are changing daily. As new apps are released, they become more powerful and accessible to all. Some of the apps are even capable of running on newer Chromebooks that run Android apps. We love to share the topic with other educators because our presentations are never the same twice.

We always have something new and exciting to share. This spring, it was the partnership with Merge cube and CoSpaces. What will be next? We’ll be sure to share as we find them. If you’re interested in learning what tools we shared at ISTE, you can view our presentation and tutorials here: bit.ly/ISTE_ARVR or at bit.ly/TeamCauthers.

Team Cauthers was also mentioned in a previous post: 8 Things I Don’t Want You To Miss From ISTE! 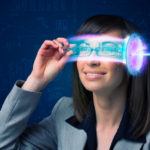