Augmented reality technology is being used to transform an empty store into a virtual Lego clothing shop that customers can explore on their smartphone using Snapchat.

A pop-up shop selling a limited-edition Lego Wear clothing line for adults opens in Fitzrovia, London today only, but the physical building is actually empty, except for a Snapcode that Snapchat users can scan on their way in, transporting them into a virtual Lego boutique.

Snapchat’s AR technology allows people to move around and see different parts of the store on their smartphone screens, which includes an interactive DJ booth, an arcade machine and the ability to look through the clothing range displayed on Lego mannequins.

“We’re an innovative, playful brand at heart and part of that is exploring new digital channels and technologies,” said Lea Sandell, social media innovation lead at the Lego Group.

“This was an unique opportunity to collaborate with Kabooki on their brand new limited edition product for adults and tap into both the sense of style and the nostalgia of that audience – while exploring that interesting space where the digital and physical worlds merge.”

The one-day event, which takes place at 55 Eastcastle Street from 10am to 5pm, will allow people to buy products online through an integrated “Shop now” feature in the app.

The move is the latest attempt by Snapchat’s parent company Snap Inc to turn a profit, though user numbers remain flat. Over Christmas, the company released a festive AR Lens, that revealed a restored virtual Elizabeth Tower complete with real-time bongs, when holding the app up at the London landmark. 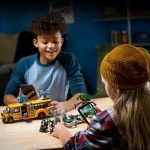 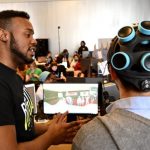