The amount of work involved to program a robot to take on any type of task, no matter how small, can be incredibly tedious. Tasks that likely require expert levels of development and programming.

Embodied Intelligence Inc., a startup co-founded by Pieter Abbeel, a professor of electrical engineering and computer science at University of California, Berkeley, along with his students, Peter Chen, Rocky Duan and Tianhao Zhang—are looking to change this with VR. Thanks to a VR headset like the HTC Vive and accompanying motion controllers, you can show a robot named Brett how to tackle simple tasks without ever having to write any additional code.

Robot Brett mimics your VR movements and learns the motions patterns of the task at hand. After a while the robot learns and starts to match how you as the human operator would have done to task. Eventually Brett can take over the task without any assistance.

Much like a puppet master, you can guide the robot’s arms. What you see in the VR headset is the POV from the actual robot’s camera. After roughly 30 minutes, Brett is able to take over on his own, remembering all the human motions and movements.

The idea is similar to how you may train a new employee on their first day or teach someone how to assemble a table—but instead that new employee is robot Brett.

“The beauty of VR is you are virtually putting yourself into the robot, and see through the robot’s eyes,” Pieter Abbeel said in an interview with VRScout. “You get to move the robot’s hands, and teach it to learn the new skill in a way that is very natural.”

Traditionally, programing a robot can be incredibly time consuming. “You’re solving the problem in your head and then writing the code to execute the solution,” Abbeel said, “which can take months and you need to be quite an expert to complete it.”

In a paper published by Cornell University. The team from Embodied Intelligence showed how an inexpensive VR headset along with hand controllers could train a robot to learn something as complex as putting two objects together, which doesn’t sound like a huge feat, but because they used VR, the amount of data needed to learn that skill was minimal. “You might only need a day of demonstrations from humans to have enough data for a robot to acquire the skill,” said Abbeel in on the Berkeley website.

This process can work with robots currently in manufacturing plants and warehouses all around the globe.

Does this mean we will be programming R2-D2 using an HTC Vive to help us around the house? Sadly, not yet. Beep Boop (sad face).

“VR is in great shape for doing something like programming robots to learn new tasks,” said Abbeel, but “there still is a lot of progress that needs be made but we’re getting there.”

On November 7, Embodied Intelligence announced that they raised $7 million in seed funding to continue the development of AI software that will utilize VR to make it easier to teach robots new, complex skills. 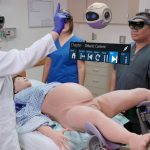 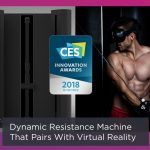