I Tried a VR App Meant to Replace Offices, and It Was Glorious

On Thursday afternoon, I slipped a virtual reality headset onto my head and felt like I’d jacked into the Matrix. Or maybe “Office Space.”

I was standing at a virtual desk surrounded by 18 gigantic monitors. The simulation, which is called Dataview VR, was specifically built for people working in finance, so many of the monitors were taken up by graphs and data points that my journalist brain didn’t know how to comprehend.

But I could easily see how I might be able to adapt the workstation for myself. Each virtual screen could show a website or word processor, and one — or five, realistically — could be dedicated to an endless Twitter feed.

When I’d had my fill of the officescape, I unclipped the VR headset and found myself transported back to Earth — specifically the New York City office of the Glimpse Group, a virtual and augmented reality platform company that brings together entrepreneurs to develop the next generation of advanced simulations. The Glimpse Group has invested in many projects. But above all else, its leaders say, it’s working toward a collaborative workplace simulation that could one day replace physical offices and eliminate commutes.

In Maggio’s vision, many people could share a space, collaborating on the same or different screens. One person could virtually dive into a 3D graph to analyze data while another prepared a presentation. The future sounds wild — and, admittedly, kind of industrious.

The concept is certainly appealing — collaborating face-to-face with coworkers, or at least their digital avatars, who live around the world, without having to change out of your pajamas.

The Glimpse Group president and CEO Lyron Bentovim told Futurism that he envisions a future in which companies invest in virtual, rather than physical, offices — like “Snow Crash” meets “Dilbert.” In this virtual world, people would blink in and out of offices or an unlimited number of conference rooms as they see fit.

“I think once people go in they understand the presence,” Bentovim said. “The key to selling VR is selling presence.”

Rather than scheduling Skype calls or chatting over email, remote employees would be able to interact with each other and collaborate on projects as though they were all present in the same place.

Different companies and services may even end up connected in a VR world of sorts, Bentovim speculated, where the physical distances between people no longer bar them from working together as well as they could in the same room.

Right now, Maggio said he’s comfortable working in Dataview VR for stretches of about 90 minutes, but with improvements to the software and VR headsets, he could envision people spending an entire 40-hour work week in VR.

The most distracting part for me was actually the aspect that tethered me to physical reality: the webcam feed of a computer keyboard that allowed me to actually get work done in the VR environment. Compared to the virtual aesthetics of the simulation, the video of the keyboard was jarringly out of place.

In VR, your hands are represented by the two point-and-click joysticks that let you interact with your environment. But then I put the controllers down — which look like floating hands in the simulation — and saw my real arms on camera as they reached for the keyboard. It was a disorienting experience, like trying to trim the hair on the back of your head using mirrors.

Bentovim said that given the choice between spending an eight-hour workday wearing a VR headset or keeping his current commute in and out of Manhattan, he would choose the latter.

“If I wanted to build the workplace of the future today, I could,” said Bentovim. “It could happen, but the big gating factor right now is the headsets.”

Bentovim suspects that VR is on the cusp of taking off, but acknowledges that it hasn’t yet. Until then, trying to replace physical offices with his simulations is, as he put it, like selling software to people who don’t have computers.

As the headsets improve and companies start to adopt VR technology, Bentovim says Glimpse Group will be able to ramp the services they can offer, creating a sort of feedback loop that draws even more people into the fold. Ultimately, Bentovim hopes to move from offering specific services to creating something more universal and customizable, sort of like a real-world holodeck.

But until that happens, it seems we’re all still stuck waiting for the train to drag us to work.

We know that virtual reality and augmented reality will help all of us in improving a lot of sectors of our lives. A new research by Vive Immersive Labs shows how it can be fundamental to make our office lives better. Let’s see how. 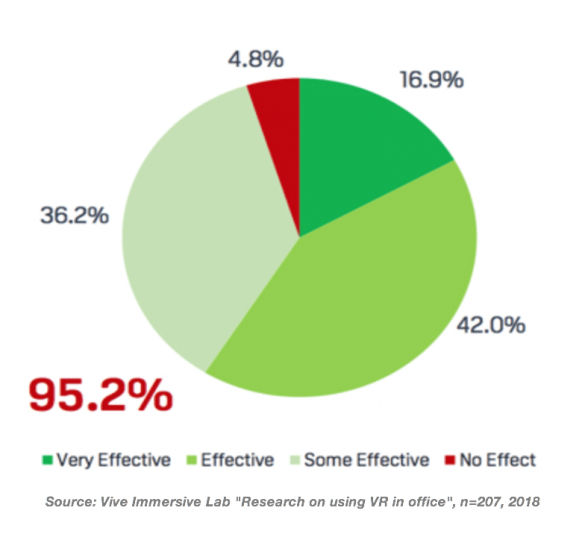 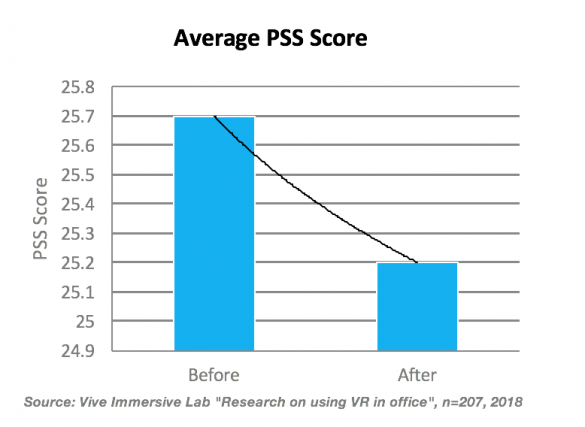 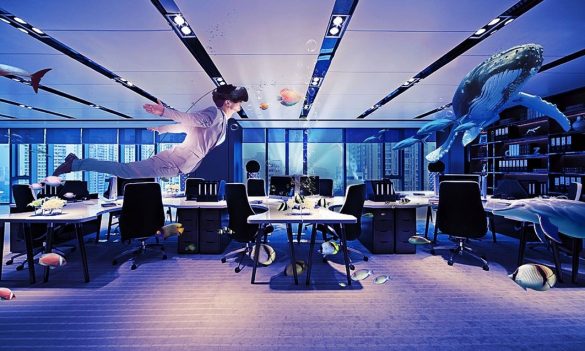 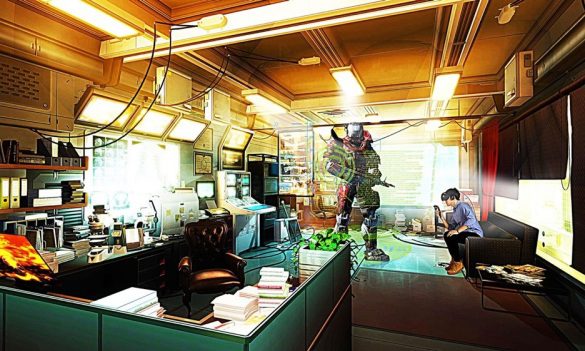 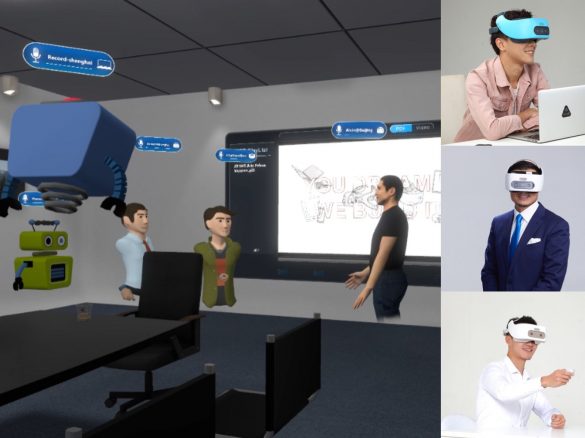 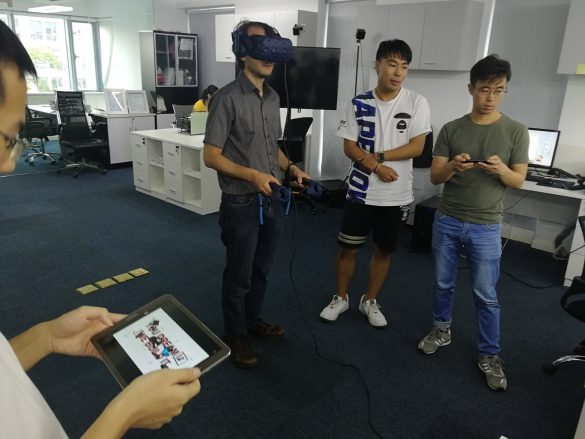 Vive Immersive Labs has recently decided to verify if Virtual Reality could be used to make the life of white collars better. This meant tried to make these people have better working efficiency and a better quality of life, with less perceived stress. To perform this experiment, they supplied HTC Vive headsets (of course Vive Immersive Labs doesn’t work with Oculus Go :D) to 207 office workers in three Chinese cities: Beijing, Guangzhou, and Shanghai (three Chinese cities that are very distant the one from the others). These people were invited to live part of the office life from the virtual reality headset, to perform working tasks inside a virtual office in the headset.

After one month of usage of the Vive headset in their offices, 95.2% of these people reported better work performances and also lower stress levels
(the remaining 4.8% were the ones wanting a Go :D).

But how have these results been achieved? And why VR can make office life better? Well, the reasons are many.

This is one of the most important reasons that has led to the above results.

In VR, every employee can create its own personal virtual office and work from inside there. So, for instance, even if he/she is working in a big corporate with lots of colleagues making noise around him/her, he/she could have a virtual environment where he/she is alone and in peace. He (let me drop the “he/she” from now on) could have a personal quiet VR space when he has all the privacy he wants, without other people seeing what he is seeing.

This for sure can help the worker in feeling better inside his virtual office, with less stress given from all the hundreds people around him, without feeling always observed and without feeling his personal space as being only a cubicle.

Furthermore, this personal space, being completely personal and private, could be customized to fit the tastes of the worker, making him feel more “at home” while being at work.

I’ve said that the working environment could be customized however the worker wants. But since we are in VR, this would mean that every kind of customizations are possible, not only the ones that are possible in real life. Do you want a whale swimming in your office? Well, with VR you can!

This may seem a crazy idea, but actually different kind of environments can lead to different states of our mind. Evan, the head of Research Lab, has clearly indicated that this was another key factor of the stunning numbers presented in the study:

This means that we can create custom virtual office environments that feel more relaxing for the workers, that so can have a better life in the office. Every one of us has a different idea of what is a relaxing environment (some people prefer the sea, others the night, others the wild nature, etc…), and with VR we can offer a customized environment for each user (this is what relaxing apps like Guided Meditation already do).

It may seem strange for us the idea of working on a virtual desk that sits in a jungle or that stays underwater, but the above results prove that it may even be weird, but it does work damn well.

If the virtual reality headset can be taken at home, the workers can even work from home and so spare the stress of the daily commute, with the classical screams in the traffic and the gentle squeezing of other people in the metro.

Expanding the above concept, people may work from everywhere. I am in Italy, but I could work easily for a company in Beijing through a VR headset.

This means that talented people should not necessarily move to big cities of the world where there are more technological and financial development (e.g. Silicon Valley or Shenzhen), but could stay at home, leading to a more uniform distribution of talents all over the world.

Meetings could be done in an efficient way by people from all over the world gathering in VR. We all know that a lot of companies (e.g. VR Waibao) are already working on virtual reality collaborative platforms and the reason of such a big interest is because VR meetings are fundamental to spare all the hassles of continuous business travels.

VR meetings have also another added benefit we usually don’t think about: it may remove the stress of meeting someone in person. When meeting some important person face to face, we could feel embarassedof looking directly him/her in the eyes, of not being dressed in the proper way, of doing even the slightest wrong facial expression. Many psychologists also say that anxiety may arise from random expressions coming from the person in front of us (e.g. a puzzled face by our boss may make us feel in trouble). With VR, these issues are removed and this means that shy people could feel more comfortable of having meetings.

This is something that is surely more important for the bosses than the employees. Since everyone can work at home and have the best office ever that suits their need… is there really the need of a physical office anymore?

This is something similar to what has happened to stores. For centuries, people wanting to sell goods had to buy a physical space and sell products from there. Since when e-commerce has entered our lives, this rule has been canceled: a lot of guys and girls sell stuff on eBay without having a physical store, without the need to rent an expensive physical space. This has let a lot of people enter the commerce field easily.

And with VR, we could have the same situation: maybe in the future companies wouldn’t need physical offices anymore and people will all work remotely inside beautiful virtual offices. This would make the creation of a company easier, enabling lots of talented people in becoming entrepreneurs.

You may say that it is already possible now thanks to Skype, but trust me, this is not the same. Being present in the same space for coworkers is fundamental and just a Skype call once in a while hardly make people feel united. I’ve lived that on my skin.

Of course, there are a lot of problems related to VR offices that have to be solved. For instance, current VR collaborative solutions can’t replicate the same level of interactions that are in real life yet and can’t even foster the same kind of relationships. Furthermore, VR headsets are still not comfortable enough to be worn each day for 8 hours straight.

We are just at the beginning, and there is a long road in front of us before we will be able to substitute real offices with virtual offices. But the results obtained by Vive Immersive Labs show that we are in the right path to make office life better.

Let’s work all together for it to happen.

Only 4.8% of people found that VR had no effect in making their office lives better (Image by Vive Immersive Labs)

Me trying the XCOL application with an HTC Vive Pro, while Steven from VR Waibao is using a tablet and another employee a smartphone