Augmented Reality is rapidly changing the world around us. From the moment it broke into public consciousness via Pokémon Go and other similar AR mobile apps, people have been fascinated with AR technology. For good reason, too: it’s more accessible than VR, as most smartphones today are AR-capable, and its intuitive, uncomplicated uses enjoy broad appeal. AR seamlessly integrates into existing practices, making AR adoption a relatively easy process for most professionals.

Today, AR has expanded beyond the realm of mobile games into a vast array of enterprise applications. Retail brands, architects, and combat pilots are all using AR to improve their day-to-day practices and enhance their workflows. Immersive technologies are crossing a new threshold of popularity, and AR in particular is leading the charge toward mass adoption. Here’s five industries that are using AR in innovative, unique ways in 2022.

Ecommerce is possibly the largest-scale adopter of AR to date. AR allows online shoppers to preview and virtually try on products before purchasing. High-quality 3D renders of accessories, articles of clothing, and other consumer goods are widely available on social media platforms and ecommerce sites. Amazon features the „View in Your Room“ option for many products, enabling users to virtually place items in their proper context; Instagram and Snapchat offer AR filters for users to virtually try on hats, glasses, and more before buying.

Glimpse subsidiary  QReal recently illustrated the power of AR try-on filters with the award-winning Bollé AR Effect filter. Working with M7 Innovations, QReal developed an AR lens where Instagram users could virtually try on the  Bollé Chronoshield sunglasses from the comfort of their own home. Users could virtually try on different frame colors using the front-facing camera, making customers more confident in their purchase before buying. Users could even simulate the effect of wearing the glasses using the rear-facing camera, as the viewing field was recolored, brightness was adjusted, allowing users to fully experience the anti-glare, anti-fog, and light-adaptive features of the Chronoshield lenses.

The AR filter was a major success, as Bollé saw an 85% increase in new users to their ecommerce site and eventually a 456% increase in year-over-year sales. This is just one example of a broader trend: studies show that products promoted with AR content have a 94% higher conversion rate than products without, and using AR in advertising increases purchase intent by nearly 2.5x. All this is to say, AR is a powerful tool for advertising retail products and elevating ecommerce platforms.

The biggest challenge most construction projects face is rework costs. These are the cumulative costs from all of the design and construction errors throughout the lifecycle of a project. On average, rework costs 12% of the total project budget, and can amount to over 20% of the budget. The leading cause of rework is poor visualization and communication, which prevents architects from recognizing design conflicts before construction begins. Recognizing conflicts early is crucial, as reworks become more and more costly the further into project development they’re revealed.

Architects are using Augmented Reality to visualize their designs from the planning stage onward, enabling clearer communication between team members and more detailed project planning overall. AR visualization allows architects to identify potential issues earlier, reducing rework costs by at least 18.4% and up to 34%. Given that the average rework costs are $1.125 million, that means AR visualization saves at least $207K and up to $382K on the average project. Beyond reducing rework costs, AR has been shown to reduce model design time by 10% and reduce construction time by 7%.

No wonder, then, that AR is finding widespread usage in the AEC industry. Glimpse subsidiary  Auggd is one of many companies providing industry-leading AR platforms for AEC professionals. Their AR platform visualizes design intent from the planning stage onward, creating clearer communication between designers and stakeholders in a given project. Not only does AR offer the host of benefits for architects we’ve outlined above, but the ability to more clearly visualize a project creates more dynamic pitches and makes securing investments easier for designers.

For readers of our previous blog post „ The Future of VR in Five Major Industries,” this section should ring a bell. Hard skills training is where VR and AR both show major potential, as companies around the globe are using immersive technology to accelerate and enhance professional training. Simulation training is where AR really shines, as AR transforms the training process for professionals in fields which depend on practical experience.

Military fighter pilots are among the most recent adopters of AR in simulation training. The company  Red 6 develops an AR platform for military flight training, creating an AR overlay within the cockpit for pilots to experience various flight scenarios while airborne. Here, AR is wholly replacing VR: VR flight simulations have been in use for decades, but AR allows pilots to gain simulation-based experience while actually flying. Red 6’s AR system visualizes virtual assets outside of the cockpit, creating a more realistic training program for fighter pilots in training.

Healthcare professionals in training also benefit greatly from using AR. AR’s usefulness in anatomy and surgical training is well documented at this point, but a less-known application for AR in healthcare lies in patient education. Essentially, healthcare practitioners can use AR to visualize complex healthcare information to patients, allowing untrained eyes to more clearly understand procedures and practices. Similar to how architects are using AR to visualize their plans to potential investors, healthcare professionals can use AR to clarify complex concepts and communicate more clearly with their patients.

AR continues to show significant promise beyond the training stage as well. Professionals in several sectors are incorporating AR into their workflow, enhancing daily practices and improving standardized processes. The great advantage AR offers is the ability to overlay helpful information on the job. Improving practical workflows without disrupting standard procedures is a major reason why AR is finding a home across several sectors.

Boeing ranks among the most effective adopters of AR to date. Wiring and installing electronic components is one of the most complex aspects of aircraft manufacturing, and it requires absolute precision in order to ensure that the aircraft meets the rigorous safety standards of the industry. Boeing has outfitted their technicians with Augmented Reality headsets, allowing them to access 3D wiring diagrams hands-free while on the job. AR-equipped technicians at Boeing can now access helpful wiring diagrams seamlessly while working, and the results speak for themselves: AR integration  increased wiring speed and accuracy by 33%, meaning technicians were both more efficient and more effective on the job. Overall, Boeing reported up to a 40% increase in productivity for employees using AR head mounted displays (HMDs).

Education is a field that’s constantly being revolutionized by new, innovative teaching techniques. The benefits of using emerging technology in education are twofold: not only do teachers enjoy the benefits which the technology itself offers, but introducing students to new technologies prepares them for the workplace of the future. Students who become adept with the latest technologies early will feel more comfortable using those technologies once they become fully mainstream.

Activated through a custom mobile app, the AR features in Emancipation are easily accessed for young readers. These features actively engage the reader and create a more immersive reading experience. Not only does that mean the story is conveyed more meaningfully, but the AR features in Emancipation perfectly showcase how education can be enhanced with meaningful interactions using AR.

Across several different sectors AR offers a range of benefits, so it’s no surprise that in 2020 alone, 6x more companies began using AR compared to the previous year. AR’s main advantage is its ability to seamlessly integrate into ongoing practices: it doesn’t disrupt or replace the way things have always been done, it improves on what’s already there. That effect lies at the root meaning of the word „augment,“ and it’s why AR is increasingly used across a wide variety of industries. 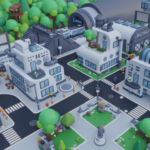 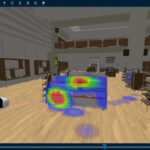