Rumor: Roblox Is Coming To The Quest 2

Everyone’s favorite kid-friendly metaverse is supposedly getting an official VR release on the Meta Quest 2.

A new rumor has begun circulating that Roblox will soon be available on the Meta Quest 2, offering you the chance to explore the uber-popular online game platform in VR without the need for a VR-ready PC. The report comes from Bloxy News, an online news source dedicated to all things Roblox.

Yesterday, the company posted a message on Twitter, saying, “Get ready to experience the metaverse in a new, immersive way. #Roblox is officially coming to another device soon… can anyone guess what it is?”

Accompanying the tweet is an image of the Roblox logo inside what appears to be the original Oculus logo. As if that weren’t clear enough, Bloxy tagged ‘Meta Quest’ in the post. Unfortunately, no official source is provided and, needless to say, Meta has yet to provide a comment.

Considering the massive success of Meta’s latest standalone VR headset, Roblox on the Quest 2 should be a no-brainer for the Roblox Corporation. The kid-friendly metaverse is already playable in VR using a PC VR headset as well as the Meta Quest via real-time streaming solutions such as Air Link or Virtual Desktop. Launching an official version of the game for Quest 2 would open up a whole new demographic of users eager to build new worlds and games on the platform.

We’ve already had an insane amount of fun in VR-friendly Roblox worlds such as Sked’s Playground, Project SCP, VR Hands, and Ragdoll Sim just to name a few. If you’re looking for even more Roblox VR content to enjoy, check out this handy-dandy list provided by TheGamer.

Of course, Roblox on Quest 2 could serve as potential competition for Meta’s own social VR metaverse, Horizon Worlds. Both platforms allow you to interact with other players, explore player-created worlds, and develop your own interactive games and experiences. According to Bloxy, Roblox will be available “soon” on the Meta Quest 2. Until then, we’ll just have to wait and see. 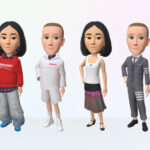 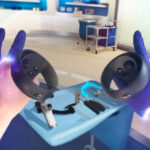 VR Surgery Training Might Be More Effective Than We Thought