Are Human-Powered Motion Simulators The Future Of VR?

A new VR motion simulator from a company called Kinerse is making waves online thanks to its human-powered design that removes the need for external power. Instead of relying on motors or electronic actuators, this “passive motion platform” uses your own weight to simulate physical movement via a simple lever system.

The device is completely open-source, which means anyone can download the project files and start working on their own modifications. Kinerse hopes that by making its designs publically available, the community will feel encouraged to implement their own improvements and help perfect the original design. Designers can even sell their creations without fear of the company taking legal action.

The design is surprisingly straightforward. The user sits on a flat base equipped with two large levers. By pulling forward and back on these controls, the user can adjust their orientation (pitch & roll). The Touch controllers are used to identify the location of the controls and the base in relation to the user. While the current iteration only supports 2DoF (degrees-of-freedom), the company hopes to eventually provide 3DoF functionality (pitch, roll, and yaw) to provide an even more realistic experience.

Obviously, a motion simulator with such a unique design will support a very limited number of VR games and apps. To help showcase how its human-powered motion sim can be used, Kinerse developed its own original VR game, Andromeda Sports. Available now for the Meta Quest 2, this fast-paced racing experience has you navigating futuristic environments using your very own hoverboard.

You can gain a better understanding of the controls in Training Mode and then put your newfound skills to the test in MIX mode, which combines racetracks to create an infinite number of possibilities. You can also race against other players asynchronously in ASYNCH ONLINE mode.

Moving forward, Kinerse hopes its open-source human-powered motion simulator will be adapted for use with a wider range of games and apps. The device is still in its early stages of development. As a result, the company’s passive motion platform may not work comfortably with all body shapes and sizes.

Those interested can download the project files for free via GitHub. The device only works with the Meta Quest 2 VR headset at the moment, though Kinerse has expressed interest in expanding to additional VR platforms. 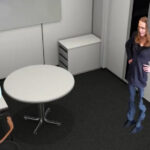 Hologram Voicemails Are Here Thanks To Asynchronous Reality 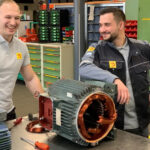